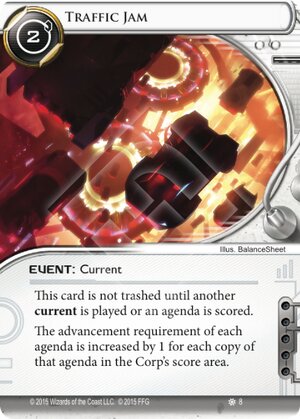 The advancement requirement of each agenda is increased by 1 for each copy of that agenda in the Corp's score area.

Illustrated by BalanceSheet
Decklists with this card

Far better than the hype its not getting. NAPD's become even more unscoreable, Astro is mildly affected, medical breakthrough gets effectively blanked, and 2/1s get a bit worse. Its nice that it's a current, and going into glacier town, this might make 4/2s see more play if people think it through. If you need a current for 0 inf to do nothing else but crack ELP or house keeping, this is a fair play. I think its fairly well costed, but 1 would have been fine. Interestingly the fragments seem good if this sees play.

This card is mostly punishing HB and NBN since they are the only factions with 6 3/2's available to them Accelerated Beta Test & Project Vitruvius, AstroScript Pilot Program & Project Beale.

(Order and Chaos era)
PaxCecilia 292
Don't forget turning 2/1s, i.e. Hostile, Clone Retirement and Breaking News into 3/1s, as well as turning the third Astroscript into a 5/2 if the corp has already scored the first two ;). — icey 1 Apr 2015
Don't forget Project Atlas. — Shishu 2 Apr 2015
Atlas doesn't care as much about Traffic Jam; it's still a 4/2 that gives you a clickless tutor with or without Traffic Jam. — Manjusri 2 Apr 2015
Yeah, both Vitruvius and Atlas don't get punished as badly if the Corp already intends to over-score them. And yes Icey, messing up Hostiles is a big deal. I'm not too worried about Breaking News, most NBN decks only ever intend to score 1 anyways... — PaxCecilia 2 Apr 2015
1

While this is a card that probably needs to exist, I don't think we'll see many Runners start packing this because of it's only going to be effective against a very narrow spectrum of Corp decks. What it does, however, it does exceedingly well, and will make a very decent alternative to Clot.

So what does it kill?

(Order and Chaos era)
postalelf 68
I feel like it also has some secondary value to interfere with any deck that is obviously 3x a few different agendas, and also just as a Current to counter Corp Currents. — Ber 1 Apr 2015
It makes scoring a second Government Takeover nigh-impossible. — JAK 1 Apr 2015
Government Takeover is a 1 of agenda so it's already impossible to legally score a second :p — SPHNX 1 Apr 2015
Oh SPHNX, way to ruin the joke. — BaronZilar 1 Apr 2015
To be fair, the joke wasn't very thought out. Now, not scoring a second Philotic Entanglement. THAT's comedy gold. — LynxMegaCorp 1 Apr 2015