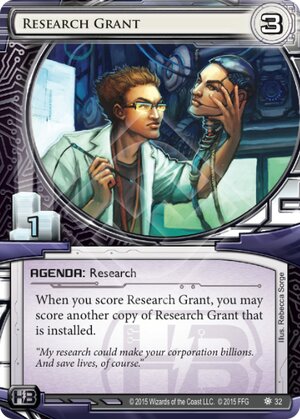 "My research could make your corporation billions. And save lives, of course."
Illustrated by Rebecca Sorge
Decklists with this card

Instead of installing both agenda's on the same turn and risking one (or both) getting stolen before scoring them, you could try a somewhat more safer approach:

Score 2AP for 5clicks and 3credits.

(Breaker Bay era)
metricsix 11
You're a mad genius! ;) — Ber 7 May 2015
I'm trying to build this kind of deck as we speak. I'll post it when I've got something satisfying (enough). — thesm17 7 May 2015
After thinking about it, it's hard to justify over NADP. If you played it in this same method (single advancing behind ice, then scoring out), it would cost 1 credit more. But you've got the perks of NADP's steal cost plus only 1 deck slot. Admittedly, they would only steal a single agenda point this way. That brings me back to my original conclusion that it would work best with traps. — thesm17 7 May 2015
Don't forget, it also plays nicely with Shipment from MirrorMorph and BiFrost Array. — lolpaca 8 May 2015
1st Install in big remote server and advance advance. 2nd fast track -> second Research Grand , install it and advance the previous one. This way you do not need to have two agendas in hand. — novatero 8 May 2015
But again, any 4/2 or 5/3 agenda can do exactly that, without needing to Fast Track. You get a little more safety in that, if the runner gets in, you only lose 1 point. But I don't see a case for that safety being worth the difficulty of getting both cards in hand and using extra slots. — Wookiee 22 May 2015
You can install these off Team Sponsorship. With two in archives and a Biotic Labor in hand, you can score 3 AP in one turn for 7c (6 for EtF). — emlun 29 Oct 2015
4

Mentioned in some comments, but put here to give it more visibility.

So here is a play that is explained in the FAQ for combo lovers.

This is an interesting agenda. The best case would be having one Research Grant installed and the runner hitting Architect in another server on a last click, letting you install two more Research Grants. Then 3 advancement actions would net you 3 AP. This is impressive. 4 clicks and 3 (1 to install the first, 3 to advance) for 3 AP is very nice.

More likely you would install two of these agendas, bluffing them as assets or upgrades either naked or behind ice. Assuming neither gets run, you can triple advance the one, bonus score out the other, and gain 2 AP. This for a total of 5 clicks and 3. Again, not a bad trade.

Unfortunately, I see this following situation happening most often: installing 2 Research Grants and one being run and stolen. Seeing the agenda's ability, a smart runner would run another unadvanced facedown asset, hoping to get a second Research Grant. Now you've spend two clicks to install two agendas and have lost them both. Thankfully, at least all you've given up is 2 AP.

Because a runner encountering this agenda will likely run again on unrezzed assets, I see this being a difficult agenda to implement. However, I could see a potential combo with various traps (especially Snare!) into which you can bait the runner, them assuming wrongly the card to be another Research Grant.

Other than in an asset/trap based deck, I see little use for this agenda.

(Breaker Bay era)
thesm17 166
Some mad genius is going to make this card work, just like they figured out how to make Notoriety work. — tiedyedvortex 6 May 2015
Shipment from Mirrormorph + Biotic Labor = All three scored at once. Crazy to have in hand tho. — lynkfox 6 May 2015
You guys are forgetting team sponsorship, which I feel is going to be an amazing card for the extra click it gives the deck that plays it well — cmcadvanced 7 May 2015
An alternate "best case scenario" would be to install, Advance, Advance a Research Grant in a scoring server with two in hand. The following turn Install, Install, advance to score out all three. A bit safer than leaving them all on the table, but still very much an outlier. — Klubber 7 May 2015
For the same number of clicks you could score a Pri Req. True, it would cost two more creds (or 3 if you're ETF), but the reward is much greater. — thesm17 7 May 2015
How is Team Sponsorship helpful? When you score an agenda, you can install another. Does it install before the scoring completes in some way, such that the new Research Grant is in play to be scored? — Wookiee 22 May 2015
Since both Team Sponsorship and Research Grant have abilities that trigger when Research Grant is scored, the player whose turn it is decides the order. Since it is your turn when you score it, you can trigger Team Sponsorship first and then the "When scored" ability on Research Grant. — NetrunningAmok 11 Sep 2015
0

Other reviewers have hit the good points of this agenda; I'd just like to give you the math going on here:

If you begin a turn with all 3 of these in hand, they are as efficient as a 5/3. Install-advance-advance one in a scoring remote; if it is not stolen you can score all 3 in 3 clicks (install-install-advance). The same math tells us that two of these can be scored like a 4/2. Install-advance-whatever, and 3 more clicks gets you two AP. The upside to all of this is that the runner can never steal more than one AP from one of these at once.

Because of this, I think Research Grant has a place in HB's long underwhelming fast-advance. Run this in a deck with all two-pointers, and it can make up those shortfalls when you are sweating bullets at 6 points. Using click-gain shenanigans makes these easier to score at the same rate as 5/3s or 4/2s, with the added benefit of things like Efficiency Committee and Shipment from MirrorMorph compressing those install clicks.

If you Fast Track this card, I think the runner has more to fear than you do.

(Breaker Bay era)
ende23r 47
Some catches: it is as click-efficient as a 5/3 if dealt with the old-fashioned way. However, it is more credit-efficient (3c instead of 5c), and you can use Shipment from MirrorMorph (which happens to be in-faction) to save 2 of the clicks — CTclone 13 Dec 2015