Turing has +3 strength while protecting a remote server.

The Runner cannot use AI programs to break subroutines on Turing.

subroutine End the run unless the Runner spends clickclickclick.

Alan Turing laid the foundation for artificial intelligence by suggesting that you could teach a computer to be human.
Haas-Bioroid • Adam S. Doyle • Breaker Bay 33
All sets:
Links: Decklists | ANCUR 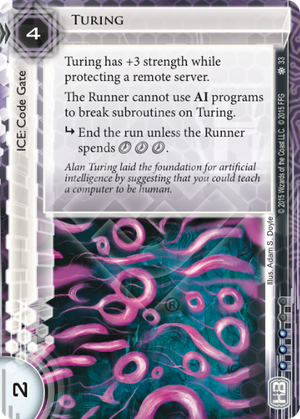 Turing is an interesting piece of ice. It's sort of a Bioroid, but not completely. It's AI hate, but they can still make it through by clicking without punishment (similar to Wraparound just being really expensive.) It has an end the run subroutine that's technically not "End the run." (Take that, Endless Hunger!) It has variable strength, depending on placement.

The obvious move is to put it on a remote, where it's potentially very taxing, at 5 strength or 3 to get through. Combined with any Bioroid (or stacked with itself) they have to break something.

However, the (currently) most popular AI breakers are Faust, Eater, and Atman, with Brahman potentially joining the club (plus occasionally Knight). Faust/Eater/Knight decks are likely running D4v1d/Parasite, leaving it vulnerable to one or the other, depending on placement. Atman is rarely used at 5 or 2, and certainly not exclusively, while Shaper specializes in Code Gate breaking. Brahman has yet to be definitively proven, but likely packs Cyber-Cypher and Chameleon. Even Apex: Invasive Predator can get around it by using Prey, clicking through, then trashing it.

So no matter what, Turing isn't there to stop the runner. It's there to tax the runner, to slow them down. The upside is that while it seems designed solely to hurt AI, it actually has a decent cost/effectiveness ratio. Viktor 2.0 costs 1 more, and has 1 more subroutine, but costs 1 fewer click to click through. Enigma saves 1, has 1 more subroutine, but either ties in strength or is dwarfed at 2 vs. 5. This is why it's included. It's a code gate that's strong vs AI, and that's useful in other matchups, whereas Swordsman is a pathetic 1 net damage, 2 strength sentry, and Wraparound withers upon sight of a fracter. It costs the classic ZU.13 Key Master 5 to get through on a remote, which is non-negligible. And all this in a relative dearth of midrange HB code gates.

Sure, it's not reliable for keeping the runner out. But if you're either playing a no-advance strategy (HB has 2 effective 3/2 agendas and plenty of assets and upgrades to bluff with), or stacking the server with Ash 2X3ZB9CY/Caprice Nisei, spending an entire turn on a single run is not feasible for long.

It's difficult to justify the splash out of faction compared to Swordsman and Wraparound, at 3 influence, which is a shame.

As the flavor text mentions, Turing is a reference to the "Turing test," posthumously named after the pioneering computer scientist Alan Turing who proposed it, which is a test to differentiate between Human and Artificial Intelligence. Hence, AI breakers "fail" the "Turing" test.

Turing is a necessary addition to the game, completing the trinity of AI-hate cards along with Wraparound and Swordsman. When facing lots of Turings in their meta, anyone running Darwin, Crypsis, Overmind or Eater only decks will either have to bite the bullet and switch to a full breaker suite, or else find ways to capitalise on making runs that use up their whole turn.

Aside from that rather hefty boon, I see a number of distinct problems with Turing that make it my least favourite of the new "technological revolutionary" ice that were released with Breaker Bay.

So yeah, if you're playing HB and can't afford the influence on Wraparound or Swordsman this might be a useful card for you. Otherwise, I feel HB is a little spoiled for choice in terms of decent, mid-range code gates.

(Breaker Bay era)
Circadia 2786
I don't like to count bioroid code gates as reliable for the same reason as eli, except worse because viktor 1.0 can just give you brain damage as you pass him by for a click, and viktor 2.0 — cmcadvanced 3 May 2015
whoops, anyway, viktor 2.0 takes 2 clicks, and one of his subroutines is more or less useless most of the time, so it's 1 more credit for a slightly more expensive, yet unreliable code gate — cmcadvanced 3 May 2015
wow, I really don't mean to be hitting enter...need an edit comment function. So the point is, the code gate situation isn't amazing in hb, I would say nbn has the best code gates, and as far as mid range would go, I'd rather rez a yagura then viktor except in certain builds. Gyri Labyrinth, hudson, hourglass are all very limited options, where turing can certainly stop eater/anything for a crucial turn. And it's a bonus if you can force a cyber cipher on a remote, doesn't have to be your scoring remote, and it's a decent tax for most other decoders. Next Bronze wants you to use more next, so it's not a universal option. I agree that the influence is high, but having 3 of these in RP would probably be silly. — cmcadvanced 3 May 2015
It's excellent for protecting a non-agenda remote like Adonis, Eve, SanSan, or Haas Arcology AI to make the runner spend their whole turn trashing it. — Lttlefoot 3 May 2015
@cmcadvanced, There are 3 things Viktor 2.0 has that Turing doesn't. If a Runner hits a Turing with not enough clicks and no decoder, it's a hard stop. If they hit a Viktor with not enough clicks and no decoder, it's a hard stop and a 1+2 credit tax (or, if the corp is rich enough, a brain damage which is always nice). 2. It's more taxing in the long run, thanks to the two subs. I'll pay 1 credit more now for an extra 1 credit tax every time the runner runs through it. Good trade. 3. You probably don't want to see Turing in your opening hand because it seems a waste to go on a remote. Ice that is self-limiting in that way is a hard sell given the precarious nature of most HB early games. Viktor, on the other hand, is very good on any central and will do in a pinch on a remote to try and force an asset through. — Circadia 4 May 2015
It improves the "clicking hell" deck, and of course synergises well with several HB upgrades such as strongbox, heinlein grid and rurhr valley. And its probably worth the influence to play one or two in RP. — ZomB 13 May 2015
Is this considered an "end the run" subroutine? Does Endless Hunger work on it? — tendermovement 27 Sep 2015
Endless Hunger should not, as it specifically says "End the run." subroutine, this sub has different text than that is targeting. — Evernothing 15 Oct 2015
So I assume the runner actually has to have 3 clicks to lose? — Kutpurse 4 Apr 2019
Yes — BlackCherries 5 Apr 2019