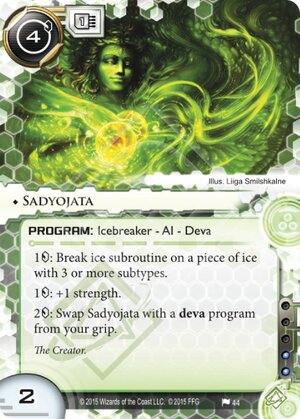 Interface → 1credit: Break 1 subroutine on a piece of ice with 3 or more subtypes.

2credit: Swap this program with a deva program from your grip.

The Creator.
Illustrated by Liiga Smilshkalne
Decklists with this card

As I look at this card, I'm thinking it finds natural synergy with some of the things people are doing with Kit and Haley right now.

Sadyojata makes sense in a Haley/Panchatantra-based rig that's cycling Sharpshooter and/or Deus X but doesn't have the influence to include Gingerbread (perhaps because it's burning influence on other cards like Spy Camera, Tech Trader, and Clone Chip). Using Sady against low-strength ice with 2+ subtypes (ex. Rototurret, Brainstorm, Yagura, Resistor, Cobra, Shadow) lets you save your trashable breakers for serious obstacles. This makes it possible for you to make more exploratory runs against face-down cards, and to run through a deep glacier without hemorrhaging all of your trashable cards on a single run. Again Gingerbread is better for this (except for ice with exactly 2 strength), but for a shaper who can't spare the influence for Gingerbread, Sady is your second-best friend.

Sady has a friend in Kit's ID ability, which is not true of Gingerbread. She also combos well with Tinkering and Paintbrush, which likewise are tools that offer more benefit to Kit than to most other runners.

The devas in general are friendly towards a lot of 2nd- and 3rd-tier shaper tricks. Exile can trigger his card draw with a Test Run of a deva from the heap, then swap it with another from the grip. Spending credits during a run to swap devas sounds like something Nasir would like to do. The Professor can include one each of Aghora and Vamadeva at no influence cost. Installing a deva onto London Library and then swapping it with another one allows you to cheat out any of the devas for 2 credits each. None of these tricks are particularly powerful, but they're all the kind of fun stuff that people associate with shaper and will fit well into a casual deck.

(Blood Money era)
jiriku 36
I hate to burst your bubble, but LLDS Processors do not work with the Deva cards as they are not "installed", just swapped. — TheBytemaster 26 Aug 2016
Good catch. I'll remove that line. — jiriku 26 Aug 2016
3

Probably worth mentioning that if you can get 2 Panchatantras into play, you can break any ice in the game with this. Depending on how subtype heavy your opponent's ice set up is, you might get away with just one. Maybe not the most efficient choice ever, but it could work.

(Democracy and Dogma era)
yggdrasil 4
The only way this is superior to Gingerbread in that case (either way you're spending influence), is if you want the ability to switch with other Devas, too. — EnderA 2 Apr 2016
Still can't break a Swordsman. Swordsman breaks Sadyojata. — RainKing 4 Apr 2016
Uh, Ender, Panchatantra is also a Shaper card. Shapers can run the trick with no influence cost — LordRandomness 9 Jun 2016
0

Interesting potential with Aghora but too costly IMO. Until we see a Deva type icebreaker with a lower initial install cost I don't think either of these options are efficient enough to warrant replacing some of the current go-to icebreaker suites. The Criminal faction Deva breaker will determine whether the three are good or garbage. If it's a modest 2-3 cost breaker with the same 2 credit ability to swap out it'll turn Sadyojata and Aghora on. If it's a similarly costed install, I think we'll all pass on it.