NEXT Bronze has +1 strength for each rezzed piece of NEXT ice.

NEXT Design's ice provides the discerning business with a suite of ice that creates a daunting security presence for intruders.
Haas-Bioroid • Ed Mattinian • Opening Moves 11
All sets:
Links: Decklists | ANCUR 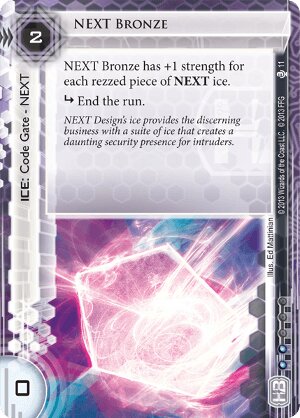 NEXT Bronze is the first in a suite of NEXT cards which include NEXT Design: Guarding the Net, NEXT Bronze, NEXT Silver & NEXT Gold. In a NEXT-based deck, installation & rez-ing of an instance of one of the NEXT ice buffs up all other installed & rezzed instances leading to ridiculous combos that get stronger and stronger as the game progresses.

NEXT Gold is also quite at home with the above combo, at 8 it's harder to get out, but is often the beefy ice of choice in NEXT-based decks. Theoretically, with full suite of NEXT ice installed and rezzed, each each of your NEXT Bronze will have an End the run. at strength of 9 and each NEXT Silver will have 9 X End the run.'s at strength of 1 while each NEXT Gold will feature a Do 9 net damage and a Trash 9 programs

Mother Goddess besides offering an End the run. it is kind of a stealth NEXT ice that if installed on a server with a NEXT-subtype ice, it gains that subtype as well further adding to the growing tally of NEXT ice installed. If you are keeping track that's now a total theoretical ceiling of 10 for each (since it's unique only one copy can be installed)NEXT instance throughout your servers!

NEXT Design: Guarding the Net with enough NEXT ice in your deck, this ID could help get your NEXT synergy going right from turn 1.

Because NEXT ice favors a rush style getting ice installed & rezzed quickly, The Foundry: Refining the Process can really help get that suite up and runner quickly, furthermore combined with Executive Boot Camp can give the corp an opportunity to use The Foundry: Refining the Process's ability potentially any turn and at 1 savings to boot. (Similarly cards like Aggressive Negotiation, Levy University, The Future is Now & Amazon Industrial Zone can all aid with accelerating the installation of your NEXT ice defenses.)

Accelerated Beta Test is commonly used with NEXT decks because of it's powerful ability more often than not of throwing more NEXT ice out there and giving a nice momentum boost to the runner.

Architect, Jackson Howard Project Vitruvius and other recursion methods can be a very important answer to any ice trashing mischief the runner may throw at you. (Parasite being a significant threat to NEXT-based strategies.

In combo with other NEXT ice NEXT Bronze can provide a formidably taxing End the run all while mutually buffing all other instances of NEXT ice.

Strength grows throughout the game providing some counter-balance to the runner's growing capabilities.

At 2 influence points for both NEXT Bronze and NEXT Silver as an out of faction NEXT-based deck is likely to be rare. Still whenever there are meaningful secondary benefits to doing things you want to be doing anyway it's always a good thing. In the case of NEXT-based decks, which is truly the secondary benefit, rezzing the ice to stop/tax the runner or increasing the entire suite of NEXT ice? When you put an agenda or tempting asset in a server just hoping that the runner will allow you to rez some ice on it you'll know your answer. (One interesting combo?: stolen Mandatory Upgrades in combo with Media Blitz

(Data and Destiny era)
chris_walker 621
#Mother Goddess is unique so you can only get 1 rezzed which tops out the NEXT jank at 10 - still very impressive though. — Legion1979 30 Nov 2015
If playing through Foundry Glacier Rush, then Executive Boot Camp deserves a look-in as it will allow you to pop the ID ability every turn while still boosting the ICE. — Legion1979 30 Nov 2015
If running through the Foundry for Glacier rush strategy, then Executive Boot Camp deserves a mention as it will allow you to fire your ID ability in both turns while powering up the suite. — Legion1979 30 Nov 2015
Thanks Legion1979, totally missed that on Mother Goddess! Kicking myself for not mentioning Executive Boot Camp because I knew of this combo. Anyway, I have updated the review on both counts and the credit goes to you! — chris_walker 30 Nov 2015
Amazon Industrial Grid is also pretty great with NEXT ICE, especially out of The Foundry. — FarCryFromHuman 1 Dec 2015
Thanks FarCryFromHuman, review has been updated accordingly — chris_walker 1 Dec 2015