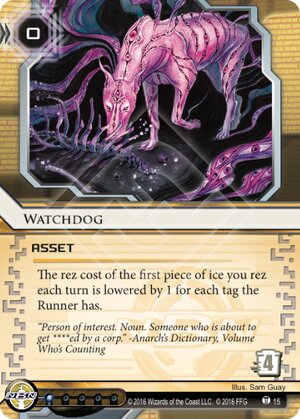 The rez cost of the first piece of ice you rez each turn is lowered by 1 for each tag the Runner has.

"Person of interest. Noun. Someone who is about to get ****ed by a corp." - Anarch's Dictionary, Volume Who's Counting
Illustrated by Sam Guay
Decklists with this card

Another tool for punishing runners that don't clear their tags. Compared to things like The All-Seeing I and BOOM! it has three fundamental weaknesses though.

In other to be effective Watchdog needs the runner to stay tagged for multiple turns. To say that's unlikely is a bit of an understatement. Few things in Netrunner are more dangerous than floating tags so runners generally try to get rid of them as soon as possible.

The second problem is that in order to get a decent discount you need to land not 1, not 2 but 3 or more tags. Most other cards that trigger on tags only require one or two (BOOM!). It's not impossible, especially with Hard-Hitting News, but unless you're going for Psychographics spending a lot of effort giving the runner more than two tags feels wasteful. And if you can get the runner a whole bunch of tags Best Defense on their ice breakers is likely more effective at keeping them out of your servers.

It's just not a good card.

(Daedalus Complex era)
Silv 326
I disagree they have to be tagged for multiple turns...if you hit them with Midseasons or Hard-Hitting News and they attempt a "glory run" (generally, run to try and get the last points to win because they can't shake the tags) then you can save 4+ credits on a rez to stop them, and it easily pays off within a single turn. This is especially important for HHN, where you CAN'T punish them immediately and have to wait until your next turn to use any other options. — LordRandomness 19 Mar 2017
Nice discount on those Data Wards you were waiting to rez... :) — LynxMegaCorp 20 Mar 2017
It's nice if it lands on something like a Tollbooth or a Data Ward...but because it's only on the first piece of ice that you res, if that first piece of ice is something like a Vanilla, then it's quite meh. — severininfurs 13 May 2017