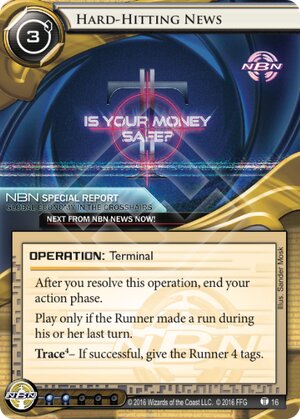 After you resolve this operation, your action phase ends.

Play only if the Runner made a run during their last turn.

Trace[4]. If successful, give the Runner 4 tags.

Illustrated by Sander Mosk
Decklists with this card

I’m surprised there’s only one review for one of the most ubiquitous, polarizing, archetype-defining, and meta-warping Corp cards in the game.

As of writing, Hard-Hitting News (HHN for short) is featured in 39% of top Corp decks (according to knowthemeta.com). Often called “Damon’s best design”, Hard-Hitting News is one of the most interesting implementations of the Terminal subtype; you load the Runner up with tags, but they have an entire turn to clear them before they pay the media conglomerate piper.

In-faction, punishments that await the Runner include Closed Accounts, Psychographics, Exchange of Information, or Market Forces. Out of faction, HHN is widely used as the prelude to having a bad time.

So, when can the corp use Hard-Hitting News against you?

As such, the common counterplay to HHN consists of not running until you have more credits than the corp, or enough where the money the corp would spend to boost the trace outweighs the value of landing the trace. The value of the trace is typically considered around 12 credits, as removing four tags costs the Runner 8 and 4. Thankfully, alternatives exist in the Runner card pool to avoid having to manually remove the tags. One of Shaper’s big strengths in the current meta is the fact that they can use SMC to find Misdirection in response to HHN. Networking and No One Home can also help removing or preventing the tags, respectively.

So while Hard-Hitting News certainly seems well designed and has counterplay in terms of both the card pool and Runner strategy, it does have some criticisms that I think are worth thinking about:

Hard-Hitting News is a powerful Corp tool that allows them to punish Runners with a painful “fork”--tempo loss or death--and can certainly provide interesting decision-making opportunities for both players. However, it is a massive hammer drop of punishment for very little crime on the part of the Runner, and as such can feel unfair at times. For better or worse, Hard-Hitting News will likely be a key player in any Corp tagging strategy for the foreseeable future.

(Uprising Booster Pack era)
dnddmdb 208
Very well put! I would love to see this card leave Netrunner, but i have no idea what could be put in it's place. — Aterriblesound 22 Sep 2019
HHN is not banworthy imo but definitely deserves a spot on the restricted list for being very powerful. That would allow tag(-and-bag) decks to still be competitive, while making them slightly less consistent. Argus, The Outfit, Gagarin, CTM and NEH, all very strong decks which rely on Hard-Hitting, usually have either GFI or Mumba Temple as their unicorn card. With HHN restricted, they would either have to give up some econ or agenda reliability. That would be enough imo. — Cpt_nice 22 Sep 2019
I think it can be frustrating to play against, but personally I don't think it's ban or restriction worthy. Competitively speaking I think these tag-based decks have a place at the table. — dnddmdb 22 Sep 2019
@Cpt_nice Corps have to have strong, game-warping cards to compete. The game is designed so that if it comes down to breakers and ice, the runner just wins. Corp cards have to be brutal to overcome how overpowered runners are just by default. — TKO 10 Nov 2019
5

I'm not sure what it says about the Netrunner universe that runners get "Priority" events (Fisk Investment Seminar, e.g.) while corps get "Terminal" operations. But certainly, the "Terminal" status of this card makes it a wholly different animal than it's close relatives SEA Source and Midseason Replacements.

SEA Source has been around since the core set, and is used for essentially one thing: Scorched Earth. Click one SEA Source, click two and three double Scorch is a kill shot against any deck not running protection. Tag n' bag, mate.

The other option used for tag 'n bag was Midseason Replacements. This is an interesting tradeoff. The activation cost of 5 is more restrictive (although the base trace strength is higher to compensate), and it requires an actual stolen agenda rather than just a successful run, making baiting plays harder. It was also higher influence, making it harder to squeeze into the home faction of murder (although putting murder in yellow remains easy).

But, Midseasons could be used in ways that SEA Source could not. SEA source only put a single tag on the runner--enough for Scorched Earth, but if the kill didn't immediately follow the runner would just clear the tag and move on. This meant that you needed to have money, SEA Source, and two Scorches in hand, all at the same time. But a successful Midseasons could easily dump 5 or more tags on the runner all at once. Clearing this many tags is essentially impossible (unless you meet the one person running Paper Tripping), guaranteeing that you would win when you do eventually draw it.

There are also other uses to a perma-tagged runner. Closed Accounts and The All-Seeing I let you cripple a runner's economy if it looks like they might be able to dig themselves out. Psychographics lets you speed out agendas. Resistor and Pachinko become much nastier pieces of ice. Lily Lockwell can find you your murder and still have tags left over to use it. There are lots of ways to creatively torture the runner once they go tag-me.

Hard-Hitting News fits in a weird place between these two. In terms of cost and trigger restrictions, it's very similar to SEA Source--one credit more expensive, but it has a 4-trace instead of a 3-trace and the run doesn't have to be successful to qualify. Except that it gives four tags instead of one.

And crucially, you cannot Scorch the same turn you play this card. Nor can you Exchange of Information or Subcontract. You play Hard Hitting News, pass turn. That means the runner has a full four clicks before you get a chance to actually make use of these tags. With that in mind, you can never use Hard Hitting News to kill a runner with no tags and 8+ credits. Even if you win the trace, they can always spend their next turn going "clear, clear, clear, clear". This means that its utility as a kill-enabler is severely limited. It's not enough to just be richer than the runner--the runner has to be actively poor. You can bring about that situation with oppressive cards like Reversed Accounts or advertisements in Spark, or raise the cost to 12 credits with SYNC, but this is a bit tricky.

No, in general, Hard-Hitting News is best used to crush a runner's tempo. Force them to clear those tags--losing a turn and spending 8 credits is a massive hit, and it will put the runner behind. Of course, they need some incentive to actually clear the tags--if you aren't running some form of punishment they'll just shrug and ignore them.

And you'll also need to actually win the trace. If able, a wise runner would gladly spend 8 credits to beat this trace, since they'd have to spend that anyway to clear the tags. Which means you're going to have to spend a minimum of 7 credits playing Hard-Hitting News against a runner with money; three for base cost, four to get the strength up.

So before you throw this card into a deck, you need to ask yourself--is my deck willing to pay 7 credits to make the runner lose 8? Or do I have a way to guarantee the runner will be broke, letting me stick the tags for cheap?

(23 Seconds era)
tiedyedvortex 4729
Another interaction 1) Install a card. 2) Advance it. 3) Play Hard Hitting News. Now the runner has to choose between running that server with tags and then keeping at least 1 tag until next turn OR cleaning all tags and letting the corp score. — mechanicalrobin 27 Jul 2016
Or play HHN and rez Zealous Judge. — ryanbantwins 28 Jul 2016
Your estimate as to how much money this costs the Runner is a tad too conservative. Yes, it costs 8 creds to remove the tags, but it also costs 4 clicks - considering opportunity cost, that is at the very least 12 credits, arguably 14-16 or even more against most decks. With SYNC, these figures go to 16 and 18-20, respectively - opportunity costs are a huge deal in this game. Of course, there's a bit of opportunity cost for the Corp to play this, but the speed bump is significantly larger than you are suggesting. Runners should absolutely be willing to spend as much as those 14-ish creds to beat this trace, and if they can't they stand to lose around that much. — The Real C 29 Jul 2016
It should be noted that revealing Hard Hitting News with a Celebrity Gift early game will hand you the next several turns on a platter unless the runner has a buttload of money early game. — ChairmanHiro 2 Aug 2016
Besides Sync, this card is absolutely brutal in Controlling the Message. The cost to trash a Commercial Bankers Group is very high, especially early game as the runner is setting up. And they basically have to trash that card. This can very likely cause the runner to end their turn with 4 or less credits. Hard-hitting News then becomes an easy play, and a massive hit to the runner. Use with Mumbad Virtual Tour to make even a somewhat wealthy runner prone. I'm going to have to say, after only running into this a couple times, that like Midseason Replacements, I don't like this card. — quailman2101 4 Aug 2016
as quailman said, this card is just stupid out of CtM (and other NBN tag, and a fair bit of Weyland) — Difrakt 7 Aug 2016
... it's a 3cr operation which reads "if runner doesn't have 10+ credits, put them 3 turns behind" and that's if you don't have scorched earth to finish off the combo. Its a death knell for any type of runner who is willing to end their turn below 15 credits, and if pulled first turn with hedge fund puts the corp a guaranteed 3 turns ahead. I truly do not understand how this card got printed. — Difrakt 7 Aug 2016
I concur with a lot of the above. The biggest use by far of HHN is the amount of disruption the card itself causes long before you ever put it on the table. It is difficult to measure the turns not taken and the runs not made because the runner was hoarding credits to clear impending tags, or to avoid seeing the card in the first place. If you really want to screw with the runner, drop the card during your shuffel and then on your last click each turn thumb a card in your hand and look speculatively at the board state for a minute before you finish. — killj0y 11 Aug 2016
This is a stupid card! — quailman2101 17 Aug 2016