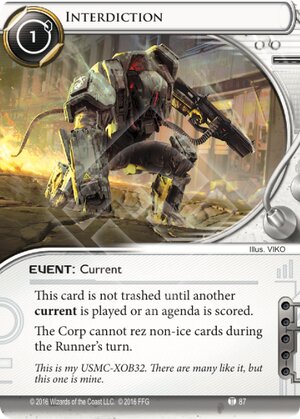 The Corp cannot rez non-ice cards during the Runner's turn.

This is my USMC-XOB32. There are many like it, but this one is mine.
Illustrated by VIKO
Decklists with this card

This card limits the surprises the Corp can spring on a runner. If that server has The Pokemon Trainer or Doc Brown in it, they will have to let you know ahead of time in order for either of them to do any good. It serves as an influence-free version of PSK's Glittery Variety Show, though offering no way of getting into the server with the previously-rezed Psychic Detective.

In some ways, Intervention is like the Councilman to PSK's GVS's Political Operative.

However.... I am really here to talk about the tube on the left side of the art.

I can see it as nothing else besides a rat-tail belonging to the suit's wearer.

The US is sending humanoid-sized rats in power armor as peacekeepers, like the Space Skaven I always wanted.

(Martial Law era)
HollowsHeart 20
Huh, I thought that 'tube' was the feed belt of the gun (passing behind the back of the suit), but on further inspection it makes no sense for it to be that long and coming out of a fire. I guess there's a fire hydrant directly behind the suit's back leg and the 'tube' is a fire hose? — Jeffrey Bosboom 10 Dec 2016
My perception of the perspective says that such a hydrant would have to be significantly taller than a normal hydrant (unless the tube bends downwards while obscured). I was wondering if it was coming from a hydrant hidden by the flames, or if instead it was part of the sci-fi parachute equivalent that the was used in the airdrop of the Marine. — HollowsHeart 10 Dec 2016
I willing to wager that this card will see same play with the updata of the MWL. Glacier is coming back, Batty, Ash, Caprice and Sandburg will be everywhere. — PanzerD 16 Apr 2017
7

The flavor text is a reference to the movie UHF from 'Weird Al' Yankovic, from 1989. The character Stanley Spadowski talk about his mop. "This mop is mine. There are many like it, but this one is mine."