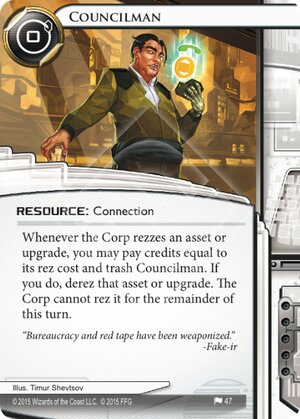 Whenever the Corp rezzes an asset or upgrade, you may pay credits equal to its rez cost and trash Councilman. If you do, derez that asset or upgrade. The Corp cannot rez it for the remainder of this turn.

"Bureaucracy and red tape have been weaponized." -Fake-ir
Illustrated by Timur Shevtsov
Decklists with this card

I know this card is getting somewhat overlooked as a "poor mans Political Operative", and at first glance that seems to be the case. It has a similar, but weaker effect, but is neutral and cost no influence. Compared to PolOp, this card is easier to install (no HQ run needed) and cheaper to use most of the time (you pay the REZ cost of the card, not the trash cost) but only delays what that card does for one turn, while PolOp trashes it completely. Of course, often that one turn will be more than enough for either PolOp or Coucilman to be worth putting down, like when you shut off an Ash 2X3ZB9CY to get that agenda from a foodcoats or RP server. Though it should be noted that Councilman is a card that needs to be held onto until the turn it is needed, if you put it down early, the corp can just early rez their cards and councilman does jack squat.

However, while the first impression of councilman is to just be an "easier but weaker PolOp", there is actually one very important thing to keep in mind that coucilman does that PolOp does NOT do. It counters "trash to use" trap upgrades, like Ryon Knight, Keegan Lane and of course Marcus Batty. Councilman will stop these from going off, PolOp will not. Now granted, the only one of those cards that is played with any real frequency right now is Marcus, but Palana is making us see an awful lot of him at the moment, so it might be worth taking a harder look at council man if Marcus or similar upgrades become popular in the meta.

Fun fact, Councilman and PolOp have nifty interactions with Jackson Howard. PolOp will counter a rezzed jackson, but not an unrezzed one, while Councilman does the opposite (will stop a facedown jHow but not an already faceup on). Together these anti-howard bros do a great job of double teaming Jackson between them............................OH SHIT PHRASING. SHIT SHIT SHIT DO NOT LOOK UP THAT IMAGE ON RULE 34. DON'T DO IT. DO NOT. OH GOD YOU DID IT, DIDN'T YOU??!! NOW IT'S BURNED INTO YOUR MIND FOREVER.