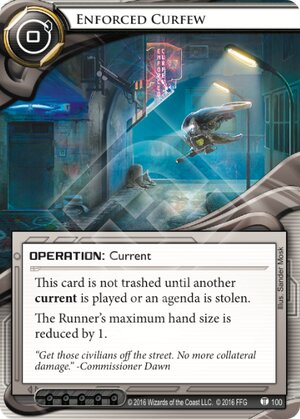 The Runner's maximum hand size is reduced by 1.

"Get those civilians off the street. No more collateral damage." -Commissioner Dawn
Illustrated by Sander Mosk
Decklists with this card

Decks that don't care about damage probably won't care about it. (They might consider using it as a cheap current, just to get rid of runner currents, but Scarcity of Resources is probably better if you're not specifically leveraging the hand-size.)

For decks that DO care about damage though, this card is actually pretty great.

The obvious one is the poor, long-suffering Cybernetics Division: Humanity Upgraded. In general, runners don't care much about their hand size until it gets down to ~3. That's when it starts hurting. I predict this card will be very popular in brain damage decks, for obvious reasons.

The other, less obvious place it's good is "thousand-cuts" style decks. Either Jinteki: Personal Evolution, or more recently, Weyland Consortium: Builder of Nations. Smaller hand size means that the runner can afford to keep fewer cards around in their grip, so the cards they DO keep there will tend to be of higher quality. Random damage pings are a more likely to hit something the runner cares about.

The final use for it is just to try to make flatlines easier. If you can make a flatline require less combo pieces, then that's a good thing, right? Unfortunately, the numbers don't really help it much here. Flatlining a runner with 4 cards is not that much easier than flatlining a runner with 5. It might open up some opportunities with Chief Slee, but I doubt it.

All in all, Enforced Curfew is unlikely to make too big of a splash, outside of damage decks. But I think it has the potential to do some serious work in those, especially brain damage. Time will tell!

(Martial Law era)
Bwob 469
Kill in New Angeles Sol, anyone? — overlord midas 26 Dec 2016
This is also decent against Şifr as it makes a runner who's drawn to the max hand size after using Şifr vulnerable to good old Scorched Earth. Also, dropping from 4 to 3 cards tends to trigger a harder discard decision than dropping from 5 to 4. — Silv 18 Mar 2017
Urban Renewal breaths new life into this card out of Cybernetics Division. You don't even need to land a brain damage if you fire this off the turn before the renewal goes off (assuming they can't get to it). We might finally have just enough pieces to make that ID into the hellish nightmare that it has always wanted to be. — syntaxbad 27 Feb 2018