The first time an encounter with a piece of ice with at least 1 advancement token ends each turn, do 1 meat damage. 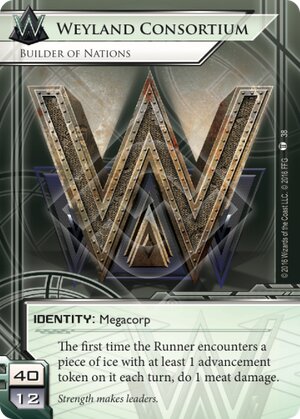 This identity is pretty great.

As of this writing, runners can get in most places. Between power economy cards like Temüjin Contract, and hyper-efficient rigs using thing like Security Nexus or stealth cards, a corp can no longer count on money-tax as an effective deterrent: Quite simply, modern runners CAN afford to run your scoring remote, often more than once per turn if need be.

To add insult to injury, Rumor Mill makes depending on a lot of high-impact defensive upgrades extremely dangerous - Marcus Batty, Caprice Nisei and Ash 2X3ZB9CY can all give out abruptly.

Well, if you can't tax them on money, you need to find an alternate tax of some sort.

Very few runners are prepared to deal with the amount of meat damage this identity can dish out. There is more than enough good, advanceable ICE to cover all of your servers. This damage can easily be multiplied by The Cleaners - either scored outright, or copied via Media Blitz, and supplemented with Prisec. (Which is also boosted by the cleaners.)

This constant stream of meat damage is dangerous. Runner builds are pretty good at preventing bursts of meat damage, to block a flatline attempt. But very few can deal with a constant drip of incidental hits. This identity costs the runner an absurd amount of of tempo over the course of a game.

But more than that, it also tends to leave the runner ending their runs (and sometimes turns) with a lot fewer cards in their hand. Which, as it turns out, is pretty cool, if you're Weyland, and might be looking for an opening to land a Punitive Counterstrike, Scorched Earth, or maybe lure the runner into an unexpected Project Junebug or Snare!. (Seriously, no one seems to ever expect Junebugs out of Weyland. I've won so many games with net-damage flatlines...)

So I think this identity is pretty solid. Coupled with Weyland's access to high-point-value agendas, it can boast impressively low agenda densities. (You can make a 4-agenda deck if you want to.) It can output crazy amounts of meat damage. It can play a glacier game, with extra costs that both sap the runner's tempo, and leave them more vulnerable to flatline attempts.

Good stuff. This is what Weyland needs - not trying to duplicate other glacier builds like Jinteki: Replicating Perfection or Haas-Bioroid: Engineering the Future, but new styles of glacier, that enable and mesh in with the strengths that Weyland already has: Making the runner's apartment go up in flames.

Just a short comment to highlight the fact that now that a 40/* Weyland ID exists, it is now possible to play a corp deck with only 4 agendas !!!

Highly unlikely that such build could lead to a serious deck, though...