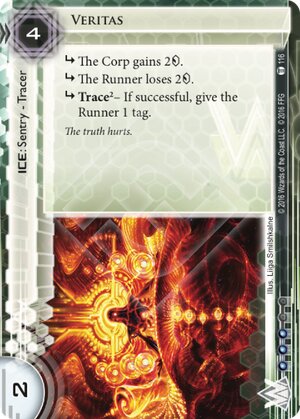 subroutine Trace [2]– If successful, give the Runner 1 tag.

The truth hurts.
Illustrated by Liiga Smilshkalne
Decklists with this card

People complain a lot about Weyland's ice, but the Flashpoint cycle seems like the beginning of a golden age for Weyland's server protection efforts. (Just in time for Şifr to usher in a new age of ice destruction!)

Veritas is part of that. A really solid "tempo swing" sentry. Unbroken, it will cost most runners between 3-4 to run through, and net the corp a nice 2 refund on the rez cost. It costs most breakers 3 to break, (6 with MKUltra!) so it's still a decent task once rezzed.

It has some obvious similarities to Errand Boy, but is probably better overall - it doesn't let you draw cards, but it has a higher credit swing, can potentially land a tag, and the +1 strength helps it lot, making it harder to instant-Parasite, and raising the break costs by 2, for things like Mongoose, GS Shrike M2 or Golden. (Or poor Pipeline, if anyone ever actually used it!)

It won't actually end any runs, but it probably makes for some solid early-game ice tax for centrals, or econ assets that you want to make a bit more expensive to trash.

Generally, ice in the Flashpoint cycle, has taken on more interesting design choices which have been effective in taxing the runner, and making a runner think. Veritas unfortunately fails to make the runner think, and will almost surely be broken. A number of ice breakers will break this for 3 – 4 . Low strength, multi-sub ice like Veritas could have presented the opportunity for the runner to consider not breaking the subs, because the costs of each one is not that high. Considered together however, they almost always will, and then the corp has other options, where a face check ends the run, or causes more damage. Just look at Mausolus; same cost, higher strength, the same number of subs, however each one is arguably less impactful (bar a trace on Veritas to give a tag). The corp wants the subs to fire on Veritas, simply from an economic perspective. Ice designed in this way, in my opinion, must present the runner with a real option to not break the subs. Veritas does tax a runner for 3 , but doesn’t do much else to differentiate itself, and the corp has other more damaging options to pick in a Sentry.

(Quorum era)
Scoogsy 84
I don't think this ICE is meant to leave the runner with a choice. Breaking it is a credit swing of 3-4 and faceplanting it is a credit swing of 5-6, so breaking is always better (unless you WANT tags because of Obelus, but even then you should break the first 2 subs). But I agree that it's not a strong ICE overall compared to the other great new ICE of the cycle. — Krams 8 Feb 2017
People don't play Shadow, they won't play Veritas. — Waltzard 8 Feb 2017
Mausolus comparison is moot. They don't share the same subtype. Also, while Mausolus is better if the Runner breaks the subs, I feel I'd rather go handsfree through a Mausolus than I'd do for Veritas in many cases. Like exhausting a Temujin or stealing a rushed agenda under Midseason threat for instance. — Lupus Yonderboi 8 Feb 2017
@Krams - I agree with you. I guess the point I was trying to make (with my limited 200 words because it's my first review), is that I believe it should give the runner pause, and consider actually just letting the subs fire. At the moment we Veritas which seems exciting at first, but ends up being mediocre. It does tax the runner, but not much else. I think Mausolus (or even Baliff) is more interesting, because in the former the subs often fire, making for a more interesting game, and Baliff gives a credit trickle to the crop, which can be used to protect the same server with more ice later. — Scoogsy 8 Feb 2017
2

Nobody played Shadow , so nobody will play Veritas.

More generously, we can compare this to Mausolus . Same rez cost, but Maus hard tags, and the Maus has more strength, etc.

More generously still, we can say that Veritas is 3 to break with Mimic . It is 4 to break with GS Shrike M2. These are fine values for a taxing ice that costs 4 to rez.

I think, ultimately, that this is decent ice to slap on a central. It retains its cost under SIFR treatement. But it isn't a gear check. It can't defend an agenda. I don't think many decks will find a place for this.