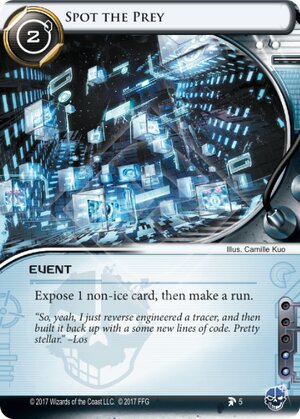 "So, yeah, I just reverse engineered a tracer, and then built it back up with some new lines of code. Pretty stellar." -Los
Illustrated by Camille Kuo
Decklists with this card

Spot the Prey is not a very good card. First off, I'd like to say that expose is a fairly underutilized mechanic. It is great to have if just to deal with Mushin No Shin, but it can be hard to find room in your deck and so, many times, runners have little or no means to expose cards. If you do find room to include an expose card or two, though, I would suggest something else.

Now the one area where StP beats Infiltration is in click compression, but only sometimes. If you use StP on a newly Mushin'ed card and see it is an agenda, then you can go grab it with the same click. This click compression costs you 2 though, not always worth it. And there are times when you won't want to make a run after. Say the Corp has four servers. The three central servers are protected by ICE that you aren't currently equipped to deal with. The new server contains a triple-advance Junebug. In this case, you'll just need to run at the Junebug and jack out. You didn't get any benefit from the run component of the card. Now it is worth noting that you don't have to run at the server with the exposed card. You may choose to run at R&D for an access after the exposed card turned out to be a trap.

All in all though, I don't expect to see this played. If you find yourself wanting to include some expose in your deck, there are better choices. Try Infiltration, Drive By, or even Lemuria Codecracker.

(Daedalus Complex era)
quailman2101 262
I just want to know how this isn't a run event. Fail. — LynxMegaCorp 26 Feb 2017
I didn't notice that, weird indeed. — quailman2101 26 Feb 2017
Yeah...it might have even been worth using with Planned Assault to have easily tutorable expose...I mean probably not but still — LordRandomness 26 Feb 2017
What? This isn't a run?! Holy dicks, this game is growing less and less consistent. — H0tl1ne 26 Feb 2017
Seems to be a card that supports that Blackguard deck nobody is playing. — Hongkong Koma 27 Feb 2017
Making this a Run event would have been PERFECT for my Ken Tenma Blackguard deck that I don't have, in the meta full of Junebugs and Overwriters we've never seen. Why does this cost anything play? — PureFlight 7 Mar 2017
At least they didn't include a typo in the flavour text. Oh wait.. — Oooer 13 Apr 2017

I would have totally considered this for my Public Terminals deck, but it's not a run event.

I’m doing my thing and catching up on card pools that I missed after quorum.

The fact that this card isn’t even typified as Event: Run is. Just... shameful.

It might have a degree of utility in a Ken deck with Public Terminal as noted above. The fact that it isn’t qualified as such makes this so useless and costly.