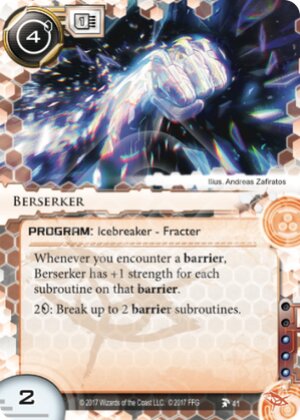 Whenever you encounter a barrier, for the remainder of that encounter this program gets +1 strength for each subroutine on that barrier.

Just looking at the raw break cost this isn't a good card.

Since Beserker costs the same as paperclip both in install cost and influence and doesn't install from heap it's clearly inferior. Only in two places is it a whole credit cheaper than Paperclip: 4 strength 2 sub (Eli 1.0) and 6 strength 4 sub (no such ice exists).

(Free Mars era)
Silv 334
Thanks for the analysis. It looked bad at first sight, but now I know why. It's sad... It was a really nice design idea. If only they had made it 1:1 break instead of 2:2, then it would be at least as good as Paperclip for all ICE it can break. It would still have the disadvantage of not being able to break all ICE and not being a heap breaker, but at least it would have the raw numbers to compete for the tough little card space that is anarch fracter. — Krams 3 Aug 2017
Realistically I don't think it's possible for FFG to design a general purpose anarch fracter that's better than Paperclip without simultaneously weakening barriers significantly. The only option I see for alternative fracters is to fill a niche. And that's what all other anarch fracters do: BlackKat is efficient with stealth credits. Morning Star is expensive in install cost and memory, is fixed strength, but breaks any ice it can break for 1. Nfr requires charging up on very low strength ice (or Sifr/Parasite support) but once charged up is pretty efficient. — Silv 3 Aug 2017
Better than Paperclip would be dangerously overpowered. Heck, I even think Paperclip would be better off having 1 less base strength for the same price, in order to not make Corroder obsolete. Niche is good. The probel with niche is, they should be really great within their niche. And BackKat, Morning Star, Nfr and Berserker kinda aren't. Or, well, they would be on their own, but Paperclip still overshadows them, because it's great in everyone's niche. — Krams 3 Aug 2017
Yeah, FFG kinda screwed up on the power of Paperclip. IMHO it should have been either install from heap or more efficient than Corroder, not both. — Silv 3 Aug 2017
A pity to read this. I thought it would have more application. Paperclip seems to eclipse all the other anarch fracters when it comes to efficiency and resilience. Its one downside is that it costs 4 to install, but even that isn't that expensive. — Severijn 3 Aug 2017
I think Berserker has exactly one purpose: making two ICE that are generally awful to break (Eli 1.0 and IP Block) fairly trivial. I actually ran one in a Los derez deck that used Saker as the primary fracter, because the rez costs of those two ICE were way too low to make derezzing them with Saker worth it. I didn't get a ton of mileage out of it, but it filled a niche. The extra credit saved over Paperclip was worth it, because these were two ICE I often needed to run through repeatedly; pretty much any other barrier was either Vanilla/Wraparound (1 to break with Saker), or was fairly large (derez with Saker/Rubicon Switch). It's not great, but it has a role that is (slightly) more relevant than you'd think. — Netrunnerunner 3 Aug 2017
2

I've been teaching and playing Netrunner with my wife in a Cache Refresh environment, and we've found that Berserker can pull a lot of weight there. Paperclip will be out of that environment very shortly, so this may very well be the go-to fracter.

Also, I have a pet theory that this, Street Magic, and Persephone are all the embryonic form of an Anarch sub theme of screwing around with subroutines. I'll eat a copy of Leviathan if we don't get an Anarch card that adds subroutines to ice by the end of our next cycle.

Oh, by itself it is pretty terrible.

So why run it?

Right now it probably isn't a good measure. It plays okay with Sifr support, but Morningstar does it a lot better if you want to just dominate barriers and it feels kind of odd to require Sifr for barriers unless you get a huge savings.

Its only really good target right now is Eli 1.0.

Yeesh... nevermind. This is just bad. Sorry guys. I tried. Its a barrier breaker that requires support... which means it should be giving you a lot more than simply breaking subroutines at an okay rate.

(Earth's Scion era)
Myriad 231
It's not bad, it's just that Anarch already has good fracters and there's not much reason to pick this over the others. You could put this in a deck running datasucker, parasite etc and the card would function perfectly fine. It's a bit of a hybrid that fills a middle ground between the go to breakers (corroder & paperclip) and morningstar. — DGB123 27 May 2017