Unbroken subroutines resolve in the order of your choice.

The greatest trick is not the trick itself, but in making someone believe that it is no trick at all. To your average sysop, it's magic. To your average runner, it's a closely held trade secret.
Anarch • Shawn Ye Zhongyi • Kala Ghoda 3
All sets:
Links: Decklists | ANCUR 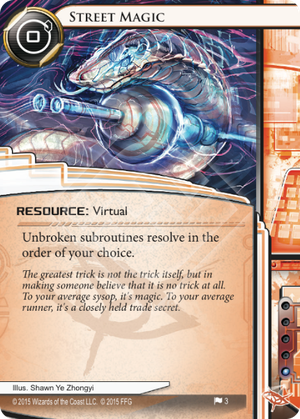 Street Magic is pretty cool. Off the top of my head, here is a list of decent interactions that it has.

First off, It can serve as a sort of mid-encounter emergency jack-out for damaging multi-subroutine ICE that has an end the run subroutine. By choosing to resolve the ETR sub before any of the other subroutines a runner can completely avoid them. Here is a list of cards that this works for:

Markus 1.0: Avoid trashing one of your installed cards

Uroboros: Avoid being prevented from making another run

Shinobi: Avoid the first two net damage subroutines (Still do take that final nasty one, though)

Orion: Avoid a trashed program and a resolve another subroutine subroutine.

Lancelot/Merlin/Galahad/Excalibur: Assuming that you either ran into a Galahad and they had something other than Galahad to show you, or you ran into Merlin or Lancelot and they showed you a Galahad, you can avoid the effects of the non-Galahad grail ice.

[It hardly warrants mentioning, but if the corp is, for some reason running Sensei, Marker or Sub Boost, Street Magic can help you out with that too.]

Some less intuitive interaction for Street Magic are:

Shiro: By resolving the second subroutine first, you can potentially access a card from R&D before the corp has a chance to rearrange them.

Little Engine: This I think, is probably the best interaction that Street Magic brings to the table. By choosing to resolve “The runner gains 5” first, Street Magic effectively turns Little Engine into a beefed-up Au Revoir economy engine.

While Street Magic is definitely cool, and interacts with a pretty decent amount of ICE, it does not really help you win in any way. Unless you’re in a Little Engine heavy meta (If those exist, please bring me to them), Street Magic at best makes face-checking a little bit safer. And since, at the moment, it only interacts with corp cards, you can’t be certain that it will do anything at all, making its inclusion in a deck exclusively a meta call.

(Kala Ghoda era)
forktines 473
Also could help with #shinobi — thunderfist 29 Jan 2016
A couple nitpicks: Caduceus is 3 credits, and you only miss it if you lose the trace for the ETR. Shinobi still hits you for all three subs, though you might want the last one first to increase the chances of hitting IHW. — Sabin76 2 Feb 2016
This card is amazing vs. Troll. — staglore 3 Feb 2016
With this card you have to ask yourself not "what this card is useful against" but rather "what are they planning to release to seed this as an option". — Zail 3 Feb 2016
The Final Nail in RotoTurrets Coffin — gamblingworld 28 Feb 2016
A more useful question is actually "what all (dangerous) ice does street magic not interfere with?" because that question will allow you to make a more educated estimate of how much danger remains after accounting for street magic. I suspect the number of ice that are both dangerous and aren't shut down by street magic in meta at any given point in time is relatively small. — LimiterDrive 15 Mar 2016
Shinobi's final sub has an ETR rider attached to it, Sabin, so if you make it fire first you'll get kicked out of the run before the two lesser ones trigger. — LordRandomness 4 Apr 2016
apex early face check... — Crashdown 17 Apr 2016
1

So you're building your janky Brahman D4v1d Wu deck, and things are going great.

Then you hit a Chiyashi, and your options are: a) Take four net and ETR b) Shred the top six cards of your stack

Not great. Hopefully, you have an SMC on the table, and $14 to pull Femme and pay the bypass. If you aren't ludicrously wealthy and well-prepared, though, there's Street Magic. At one influence, it will totally save you from the facecheck.

...You still can't get through, and it's not tutorable, but hey. Being practical is for other runners!