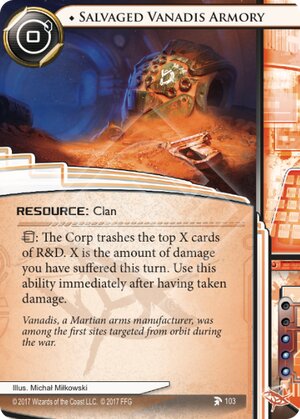 trash: The Corp trashes the top X cards of R&D. X is the amount of damage you have suffered this turn. Use this ability only during the next paid ability window after suffering any amount of damage.

Vanadis, a Martian arms manufacturer, was among the first sites targeted from orbit during the war.
Illustrated by Michał Miłkowski
Decklists with this card

RIP. Banned less than two months after release. For anyone who never had the pleasure of playing against this card and is wondering why it got banned, look no further than here: netrunnerdb.com

At first glance, this seems like a modest deterrent to the Corp trying to do small amounts of damage, as it won't help you if you're dead. On closer inspection, the following things become apparent:

This resulted in an archetype where the runner plays solitaire until they have all their combo pieces, and then self-damages enough such that triggering all three copies of this card will mill around 30 cards in one turn.

This was a stupid, frustrating deck to play against, and very little counterplay was available other than trying to score out before R&D gets nuked.

If this strategy had been caught during playtesting, some minor tweaks (only counting damage done by the corp for example) may have balanced this card, but I'm not sad it's banned outright.

(Crimson Dust era)
timurleng 159
Never played against this, and glad I didn't. — quailman2101 6 Oct 2017
The one game I played against it, he messed up his turn and conceded. Lol. — NoSoup4you 12 Oct 2017
It is sad that this card triggered on runner damage otherwise it would've been a great boom damage deterrent. If this is sitting on the board you'd basically guarantee that no one is going to hit you with a "Value BOOM!" A 7 card hit to R&D gives a high probability to hitting at least 1 agenda. — JDC_Wolfpack 13 Oct 2017
Given that they changed a few other odd or ridiculous card effects recently through errata (Salsette Slums, Standoff!), I find it bizarre that they didn't errata this to something like "...damage you have suffered from the corp this turn." when they clarified the last sentence of it. — cinnadream 18 Oct 2017