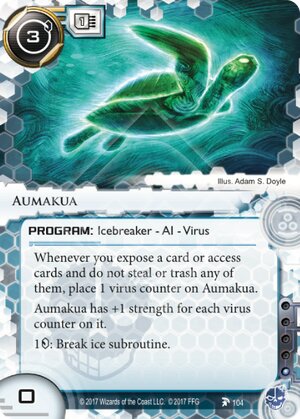 This program gets +1 strength for each hosted virus counter.

Whenever you expose a card, place 1 virus counter on this program.

Whenever you finish breaching a server, if you did not steal or trash any accessed cards, place 1 virus counter on this program.

Aumakua is everything you really wanted Darwin to be.

That being said, there is one thing it's not: a breaker in the conventional sense. Now that Snitch is gone, there aren't any unreasonable combos where you can make Aumakua your primary breaker for getting in to servers. And unlike Eater, it's not particularly well suited for being your backup plan when facechecking big ice. The big turtle is, however, so much more than just a way of breaking that annoying Excalibur. It excels at being two things:

One of the most attractive things about Aumakua is that, at 1 influence, it can bring this Criminal flavor into any other faction for very little cost (its best friend Dean Lister isn't even a Criminal card at all). Therefore, you can get all the benefits above in a more virus-focused Anarch deck as well as in a Criminal build (the Shapers already have a lot of fancy program tricks in-faction). Also useful for cleaning up weak ICE before you can get your whole rig out, Aumakua is a solid addition to any icebreaker suite, taxing the Corp and being the sort of jack-of-all-trades that makes Atman fun, albeit with a very different style.

After my last review where I lambasted my least favorite Runner ID, I thought maybe go back and visit a card I really like. And that card is everyone's favorite guardian: Aumakua. Fun bit of trivia: an aumakua (pronounced oh-mah-KOO-ah) is, according to Hawaiian folklore, a guardian deity of one's family. One of the forms it can take is everyone's favorite turtle program.

I absolutely love Aumakua. Not because it's exceedingly strong (it can become the juggernaut if the Corp doesn't purge), or because it's incredibly cheap (1 per subroutine is pretty good, especially for a 3 install). I don't play Criminal all that often, either, but it isn't because of influence (1 influence is incredibly cheap). So why do I love Aumakua? Because it's one of the first cards I saw during my first game.

Bit of story time. At my LGS, the January before the announcement of Jacking Out, I made the mistake of picking up the Core Set of L5R. While looking for people to play against at my LGS, I came across some people playing Netrunner. Curious, I stopped to watch the game, and after a few rounds, I asked if I could play. One guy, let's call him J, let me borrow a Valencia Estevez deck. I don't remember the entire deck setup, but there were two cards that stood out: Maw and an fan-made alt-art of Aumakua he had gotten from eBay (sleeved, obviously). The turtle stuck with me, and as soon as I got my copy of the (original) core set, I picked up Crimson Dust and Daedalus complex, making a Noise deck with Aumakua, not realizing Noise was rotated. During my early days, I would try to slot Aumakua in wherever because I liked the card. If NISEI wanted to print their own promo art for Aumakua, I'm sure I'd buy it in a heartbeat, all because it's the card that got me into Netrunner in the first place.

Another addition to the time-honored Snitch - Au Revoir - Reflection engine, at least until the first two rotate out. Expose is a niche mechanic not often used, so it's nice to see something that can take advantage of that.

Similarities can be drawn with Darwin as a relatively cheap, versatile AI that can gain momentum very quickly, but this virtual turtle can gain up to 4 virus counters a turn (more if you import shenanigans like Incubator or Surge.) In addition, Aumakua is 1 to break as opposed to Darwin's 2, making it much more affordable to use. It's also 1 influence, so importing to Anarch isn't a losing proposition.

As mentioned, Aumakua works well hand in hand with Snitch or other expose cards, like Infiltration, Deuces Wild or (not) Raymond Flint. Criminals have a laundry list of expose cards - that is to say, most of the expose cards available - and Aumakua benefits on top of all of those. Silhouette: Stealth Operative is a good fit for our turtley friend, as her ability gives natural exposes along with her runs.

The ease with which you can put counters on Aumakua - especially in superwide asset spam decks - is its greatest strength against the Corp's best defence: purging. The way Aumakua works means you can easily recover tempo if your deck is prepared to help it out. Keep expose cards ready to give it the boost it needs. Keep a killer on hand for Swordsman, if anyone even uses that anymore. Keep a decoder, too - I suggest Abagnale - for Turing, but I only say that because I specifically nearly lost a game to Sir Alan. Unless you're teching specifically against it I would save on deck space, though.

Aumakua is a virus, which means it can benefit from MemStrips, Déjà Vu, and the usual complement of Anarch-based virus cards (Hivemind, Virus Breeding Ground and the aforementioned Incubator come to mind). If you're not too tight on influence then consider importing some of these shenanigans to make Aumakua harder, better, faster, stronger o_o

In conclusion, Aumakua is a cool virtual turtle that takes Darwin's strength mechanic and updates it for a new age and a new faction. It has good synergies both in- and cross-faction, and if you're not afraid of AI hate definitely give it a try in your expose-based Criminal decks. Alternatively, have a go at bringing it into Anarch as a low-costed and low-influence AI that benefits a lot from virus-based strategies.

(Crimson Dust era)
Agenarchi 95
You forgot the great synergy between Aumakua and Dean Lister, even without virus counters, which mean great control deck ! ;) — LeePo 23 Aug 2017
This ability works in archives? — titonosfe 23 Aug 2017
(it doesn't work in archives) — Agenarchi 23 Aug 2017
On access to Archives, there's no opportunity to trash anything, though I guess if you Film Critic'd an agenda out of it you'd get a counter. Not sure about the ruling on this one, since you definitely do access things. Maybe it's to stop you adding a counter for every single card in Archives? — Agenarchi 23 Aug 2017
It should work on archives. It isn't checking for things that have trash costs, only that you accessed cards, and did not steal/trash. Notably it asks that you access cards, so the most counters you can get is one at a time, regardless of how many cards are in archives or the server. — lp87 24 Aug 2017
Would Reflection do anything? It reveals a card and Aukakua works of Expose and Access. — lunchmoney 29 Aug 2017
Shouldn't work with Reflection because it's not Expose or Access. Archives should work, based on wording, even if (just guessing) not implemented correctly on Jnet — koga 30 Aug 2017
Oh, I just included Reflection because I use it as part of my Snitch - Au Revoir engine. — Agenarchi 31 Aug 2017
Does it work very well with datasuckers/desperado? — Northnilly 1 Sep 2017
Does it synergize with Salsette Slums? — zmb 2 Sep 2017
Does drive by place a virus counter on Aumakua? I think there was a ruling on Drive by that the expose preceeds the trash...so they aren't simultaneous? — analogBrad 25 Sep 2017
What about interactions with Eater? "Whenever you expose a card or access cards"... Technically speaking, with Eater, you do access cards. You just access 0 of them (allowing for a replacement effect). — HandKing 4 Oct 2017
@zmb I think it does trigger on a Slums with the 4.1 Slums errata text. Previously it was a replacement effect for the trash action: Runner trashes (action preventing Aumakua trigger) and accessed card is removed from game (replacing normal effect of trash action). Now Slums is a paid ability: instead of trashing Runner "may pay the trash cost...to remove that card from the gain" so there is never a trash action. So Aumakua should trigger I think. — analogBrad 8 Nov 2017