trash: Derez a piece of ice protecting a remote server. Use this ability only during the next paid ability window after a successful run on HQ ends.

You remember when Maxi was making book for Chacon. He's moved up in the world and gained the veneer of respectability. But as an executive the people he works for now, are far more vicious, bloodthirsty, and crooked.
Criminal • Marius Bota• Terminal Directive Cards 11
All sets:
Links: Decklists | ANCUR 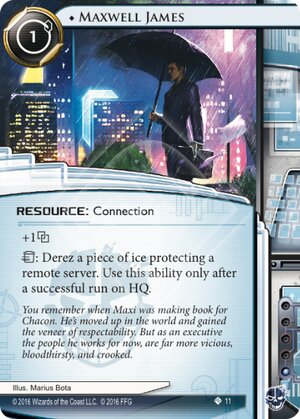 This guy is one versatile connection.

2) He's one influence, so you will notice him popping up in Kim, Sunny, and Wu decks focused on link/connections, in addition to Geist, who he loves for the trash ability as noted below.

3) He's also a pseudo Emergency Shutdown that can be used at weird times during the runner turn! After running on HQ, you can run on a remote safe in the knowledge that any unrezzed ICE will be very expensive for the corp (sad days if it's Vanilla though). I believe the window on him is such that you can either force the corp to rez twice or simply shut it down and bypass entirely. (Please correct me on this if I'm wrong!)

Since he's unique you can't pull off completely absurd multi-James combos during a run without Street Peddler, which is probably for the best. Easily one of the best sources of (one and only one) link in the game, and a great splash in almost any faction for his great ability.

(Whispers in Nalubaale era)
Steamwood 282
You've almost got the derez part down, just a quick clarification: you can either 1) derez an ICE on-approach (this skips on-encounters BUT allows the corp to rez again, if they can) or 2) derez on-encounter, suffering any on-encounter effects (NOT bypassing) but taking away the opportunity for the corp to re-rez. What makes Maxwell special is that he allows the Runner to choose whichever is the better option. — BlackCherries 25 May 2018
Btw for Anarchs who just need the link/connection and are influence-starved, The Archivist can provide a cheap +1 link and give a decent-but-not-great effect as well. — BlackCherries 25 May 2018