Adept has +1 strength for each unused MU. 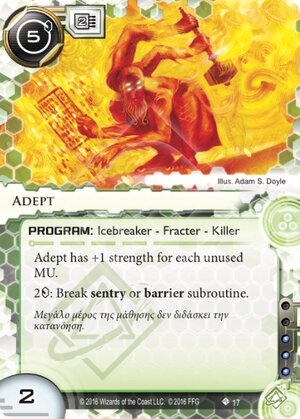 Most interesting of the Sage/Savant/Adept trio for two reasons,

Quite good as an in-faction Killer, decent Fracter as well.

(Terminal Directive era)
dwjmeijer 51
How this one got the highest base strength is a mystery to me. Poor design if you ask me. — LynxMegaCorp 17 May 2017
What makes you say that @Lynx? — thunderfist 17 May 2017
Hypothesis: since Savant has the lowest cost per sub for code gates if Adept doesn't have a higher base strength FFG may be worried that people just use Savant + Corroder and Adept doesn't see actual play. — Silv 17 May 2017
If you run Adept I don't think there's much reason not to run Savant as well. You've already invested in having free MU and Savant is rarely less efficient than Gordian Blade in that case. — Silv 17 May 2017
This breaker focuses on Shaper's less powerful breaker suite (their order is Code Gate, Barrier, Killer, I think). So the fact that Adept breaks Shaper's weaknesses yet has the highest base strength doesn't add up. If anything, Sage should be at 2, with Adept at 0. (Savant at 1.) — LynxMegaCorp 18 May 2017
Code gates tradtionally had the fewest subroutines, at least before mumbad cycle. Paying $2 per sub on the types with most subs is enough of a drawback. — Lttlefoot 21 May 2017
... So the excuse for Sage being the same (2 to break) and less strength is...? — LynxMegaCorp 21 May 2017
I think the reason for Sage being lower STR is that it's a 2-in-1 solution for ETR Ice. Breaking Sentries is nice and all but very few have ETR subroutines, so you're still getting an access and successful run, despite some possible damage. — Xh4rx4d 16 Jan 2018