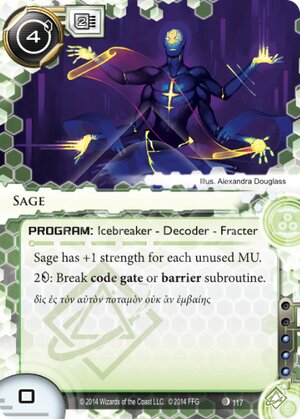 This program gets +1 strength for each unused MU.

Remarkable is, thats its a Decoder AND a fracter, so you can break two types of ICE.
I think this Breaker works well with Ekomind powered by Origami, Theophilius Bagbiter or other ways to expand your handsize.

With enough cards in hand Sage will break big barriers -which are popular atm thanks to Blue Sun: Powering the Future- like outermost Curtain Wall for 6 (with E3 Feedback Implantats for 4).

Alternatively you can boost up your MU by in-faction and/or neutral Mem-Chips or you host it on a Dinosaurus, which gives you effectivly +4 Str (2 from Dino and 2 from not using the MU).

Till now there are only a few big Code Gates in Meta (Str 5 Tollbooth and Viktor 2.0, or has anybody seen Cell Portal lately?), but in future as we know from actual spoilers there will be some more which likely will be found:

This Breaker has potential, but the problem is, that it needs other cards to work well. On its own, with no other programs installed and standard mem, its only Str 2. Installing the missing Killer costs you at least another 1 Str unless you use Cloud-Based ones, which need a further setup for their own, or host the killer on Omni-Drive.

A good combination (when its installed) could be Chaos Theory: Wünderkind, Dinosaurus, 2 Dyson Mem Chip and Creeper combined with e3 Feedback Implants giving you a 7 Str Decoder/Fracter and a killer mostly in-faction.

Then I could stop trying to make overcomplicated and hideously cumbersome machines with too many expensive moving parts abusing the anarch Caissa and Virus only memory units... and do something that might actually work instead.

But I can't stop trying to think of ways to make this work out. And failing.

(Order and Chaos era)
paulxthompson 238
I think that the best way to try to build this is not trying to abuse it and instead try to find where it will fit as a tool supportive with your other goals. — Zail 11 Jan 2016
9

So I'm not sure if it's just me, but the way that I see this card seems to be completely the opposite to every deck I've seen this card put into. I don't think this card is one that you build a deck around to get it to strength 10. To me, this card screams early aggression, keeping the corp from scoring early behind cheap gearcheck ice while you build your rig. The fact that it counts as 2 of your breakers gives it solid speed and lets you through most of the corp's cheap ice, and as the game goes on, it gets obsoleted by your other breakers (becoming weak in the process).

(Order and Chaos era)
Tr33beard 242
Tried this with Wyrm in my CT deck - Sage and a (Test Run/Scavenged) Femme Fatal. — KarzinomEngel 17 Feb 2015
I've thought this before! With Chaos Theory, this is a 3 strength fracter and decoder... With a mimic in play as well you can get past 3 strength sentries and 2 strength barriers and codegates! Scavenge it a few turns later for your better decoders/fracters when they get better Ice in play — PaxCecilia 17 Feb 2015
Datasucker is also an option, though at that point you might prefer to just use Darwin instead of this. — Lttlefoot 4 Mar 2015
5

I think this card is bonkers in multiple ways and they are not all positive.

When it comes to deck space efficiency this card is great. It is 2x, 2 breakers rolled into one. As a shaper that is pretty cost efficient. Gordian Blade cost 4 and you can import Corroder which costs 2.

Of course everybody can see that. It is the simple fact that it is hard to make it work in terms of strength and break cost.

This is were MemStrips come in. This is the only card that provides Sage a 1 per strength (permanent!) boost. The extra bonus is the fact that you don't need a setup order in order to make it work. Cards like Dinosaurus, Ekomind, Origami etc are all really cool ideas, but really depend on you drawing it in the right order. That is why they don't work IMO.

Now lets bring Sage to terms with the ICE he has to deal with. First off, Sage will almost always be run in Chaos Theory as her ability compliments Sage. Throw it down as your first program and you have a fixed S3 decoder/fracter. Perfectly fine as early game icebreaker. Every MemStrips you provide will give it +3 strength. So with 1 card you can bring it to S5 (presuming you've installed a killer), etc etc.

The 2nd big point most people don't like about this card with the fact you need 2 to break a subroutine. This is expensive and also make Sage a horrible card against low strength ice. Paying 2 for a Quandary is just stupid. Often e3 Feedback Implants don't help either as these ICE have only one subroutine. It is against high strength ICE that makes this card good, because you don't need to pay for the strength boost every time. Paying 2 for firewall is just hilarious. So basically it's a trade off.

The last thing (and also the biggest problem for me) was the tempo. Needing additional cards to make Sage work better costs tempo (draw, instal, credits etc). Therefor I think this card works best in a stimshop deck. Personal Workshop helps make things cheaper and banks the things you need while you continue to irritate the corp. Then, when you need it, you Stimhack the best juicy server you can find and just throw down everything you need.

(Order and Chaos era)
DrunkAlex 328
Just occured to me... Sage works well with Lockpick - being a decoder. And putting him on Dinosaurus while playing CT, makes it a STR 7. That is big. Q-coherence Chips also work - at least as well as Akametsu. I think I have an idea for a deck :D — chom 9 Mar 2015
Haha, awesome. You might also have given me a few deck idea's! :P — DrunkAlex 9 Mar 2015
Q-coherence Chip is awful. No exceptions. Used SMC? lost a program from damage? kiss your chip goodbye. — Kroen 9 Mar 2015
Then don't take the SMC. Fetch you Sage with Test Run - i think that will work? — chom 9 Mar 2015
Even so, 3 ST fixed, nearly-universal breaker in early game is nothing to sneeze at. Also, even if going through the Quandary and Paper Wall is ridiculously expensive, it is big hit against rush decks, hiding behind NEXT Bronzes, Ice Walls and such. — quiciuq 10 Mar 2015
Just a thought: having 3 Lockpicks, 3 Dyson Fractal Generators, Spinal Modem, and Net Celebrity you could have 9 reccuring credits to run each turn - for a breaker that does not need to be pumped up. Enough to break 4-5 subroutines each turn. And basically you can treat all +MU hardware as The Personal Touch for the Sage. Replicator could work wonders. Just add a Killer of your choice and profit. — chom 10 Mar 2015
after I played against a Sage deck, I realized two things: 1. it is hard to score anything early when a Sage is out, since ETR ices are mostly barrier or codegate. 2. It does start with low STR when the corp prevers to play low cost low str. ice in the beginning, and as the game goes on it gets more efficient and strong. Very good breaker for the right deck imo — us0rman 10 Mar 2015
Blue Sun can Oversight a Curtain Wall pretty early, and can hard rez one a turn after. Regular Sage decks have no means to go to 10 strength. That requires making the deck jankier with Ekomind+Bagbiter/Origami+Public Sympathy or Deep Red+Mem Strips. — Kroen 10 Mar 2015
Actually, it's quite doable, but you do need to get both Mem Strips. I use Box E, 2 mem strips, 2 dyson, Creeper as well as drip economy and managed to be a nightmare once I'm set up and with potential Str 12 if the star align — razhemnet 10 Mar 2015
or u add just 1 d4v1dto your deck and get it with testrun... — us0rman 11 Mar 2015
Not sure if it's a good early breaker. You generally want to install a killer first, which Sage is not. — Lupus Yonderboi 11 Mar 2015
That depends on the matchup - vs. Jinteki you're probably right, but against NEH, TWIY or even HB trying to rush behind single NEXT or Quandary it works wonders. Also, it's merely presence on the table makes impact on Corp, slowing him down and icing everything double. — quiciuq 11 Mar 2015
If you run Dinosaurus and have no other MU on the table, Sage sits pretty at strength 7. There's not much in the way of ice that you won't be able to crack with that, especially since you can hit it on Turn 2 (or Turn 1 with a perfect hand). Toss in one MemStrips for emergencies (or for shoring Sage up when you play her prior to drawing Dino) and you're all set at 10. — KitsuAeryn 19 Mar 2015
Run this with Kit and Paintbrush and you won't need a killer at all. — Chromatikat 9 Apr 2015
I mean. Kit, paintbrush, surfer, sage. Done, new deck lol — codychilton13 1 Apr 2016
4

For the curious, some googling shows that the text at the bottom is "...and you cannot step twice into the same stream." This is the end of a quote from Plato's Cratylus, the beginning of which is "All things move and nothing remains still..."

Does anyone know the context of the quote?

(Old Hollywood era)
underflow 5
You shouldn't expect something to have the same result if you do it a second time. — Voron 23 Aug 2015
Actually, Voron, it's more of a metaphysical claim than any parcel of 'life wisdom'. There are multiple possible readings, but the two usual ones are "some (or all) objects, despite being understood as objects, are processes and have no permanence" and, in reflection, "the realisation of the permanence of the person stepping in the river is the result of the impermanence of the surroundings". There are, however, multiple fragments of ancient texts containing variations of this text, called "River fragments" and they dont all permits the same interpretation. The idea behind Plato's quote is refered to has the doctrine of the heraclitean flux. — Akanthinos 23 Aug 2015
I get the impression Akanthinos knows this subject matter somewhat better than me, but I'm gonna wade in anyway, mainly because I think it's important to attribute this quote to Heraclitus rather than Plato. We don't have a whole bunch of Heraclitus' text - it's all just quotes from other authors - but he's generally reckoned to be a thinker of chaos, flux and paradox. You can't step into the same river twice because the water has moved on, which is to say a thing is not identical with itself from moment to moment. — Greasythumb 23 Aug 2015
It's philosphy from a sage... — Goldstep 23 Aug 2015
Yes, Sage is a quote from Plato's Cratylus, which itself is a quote from a course Heraclitus gave that Plato supposedly attended earlier in his life. — Akanthinos 24 Aug 2015
0

This card works great with Şifr. If the Sage is the only program taking up memory it will have 4 STR and also be able to break even stronger ice if we use Şifr's abilty.

Not the best card, but I thought that it was worth pointing out the synergy. Maybe a deck could be built around it when Adept from Terminal Directive also comes out.

(Station One era)
XoXoX 71
If you need 2 copies of Sifr (to have a decent shot at drawing it before you need it) that's a whopping 8 influence in Shaper with the new MWL though. Running 2 copies of Sage in Anarch is still 6 influence. That's expensive. Also you need some MU for a Sentry breaker so unless you pack extra MU hardware you're not going to get that 4 STR. And when you need to pay 6 to break 3 subs the efficiency win from a single breaker is going to have a heavy credit cost. — Silv 16 Apr 2017
You see, the problem with Şifr is that it's hard to find a card that doesn't work great with Şifr. But your review is otherwisely valid. Just... not very... Hmph. — H0tl1ne 16 Apr 2017