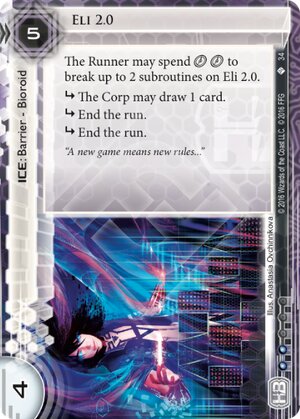 subroutine You may draw 1 card.

So in Core + Terminal Directive formats this card actually manages to do some work. Unless I'm mistaken about the timing structure, in Seidr the first sub will fire after you decide what to put on top of R&D if they click through the ETRs. Not a bad econ engine in theory if you're pulling back some operation econ.

As for taxing it costs 3 for Battering Ram and 4 for Adept and Demara to break (+2 for all of these if they want to stop your draw), 4+1 (optional) for Corroder and 6+1 (optional) for Mammon. That covers the most realistic options runners will take to break this in Core + TD.

I expect some Datasucker out of Steve, but that's only going to make a difference if they're not currently using Demara (or using an excessive amount of counters).

5 for the cheapest full break is not too shabby. Economies are flimsy in this format, and at that price he's just begging to be clicked through to trigger the Seidr ability.

As a result this has discouraged more runs that I feel like Eli 1.0 would have just gotten clicked through. In the games I've played people would rather stay at home and let a campaign tick away than give a card to get in without going broke.

As for constructed play outside of Core + TD? Well he has a slight problem. Paperclip breaks him for 3. Paperclip also breaks Eli 1.0 for 3. 2 spent to be slightly better when clicked through vs 2 saved having the same break cost against the most popular fracter in the field.

I'll be seeing you in a few months buddy, when your younger self has rotated out.

Oh and one last thing: be careful about runners intentionally letting the draw fire if he's in front of R&D. There are three R&D multi-access cards in Core + TD, and letting the draw fire doesn't just make the R&D run cheaper. It can also push seen cards out of the way for another deep dig. It is optional, so you're going to have to resist the urge.