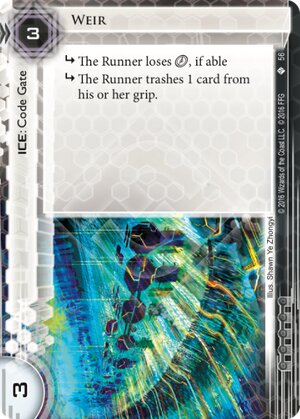 subroutine The Runner trashes 1 card from his or her grip.

Illustrated by Shawn Ye Zhongyi
Decklists with this card

Rather underwhelming. It's gearcheck ice without stopping power and with only two mild subs:

Enigma has the same cost, only one less strength and has an "End the run" as second sub instead of a weak discard from grip. The difference in strength doesn't matter much since both are in gear check range but blocking the runner from accessing does. Therefore I think Enigma is the better card and Weir won't see much play.

(Terminal Directive Cards era)
Silv 326
If you see it as damage that cannot be prevented, its a little more interesting. This will definitely see play in decks that just want to tax and punish face checks, at least. — LynxMegaCorp 6 May 2017