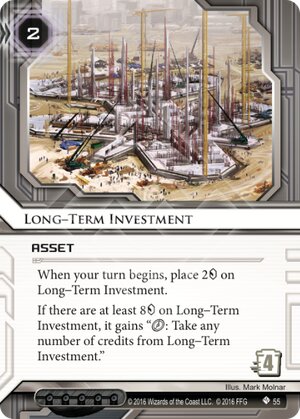 Illustrated by Mark Molnar
Decklists with this card

This card isn't bad if you start thinking about how you can manipulate the runner instead of what it gives you.

If you put this out, the runner is probably going to run it three turns from now (or sooner). Put it behind a protected/trapped remote and take advantage of that! Reveal a new, expensive threat and make them pick between the two!

Make sure you can follow up on the threat, though. Nothing is worse than having 8 credits with nothing to spend them on. Also, if you're already rich, the runner isn't going to care.

Granted, if you're NBN and want to force a run, just use Daily Business Show. And if you're Weyland, you can use, I dunno, Capital Investors or something nastier? And Jinteki has Sundew...and HB has Adonis Campaign...

Okay. Yeah. This card isn't great. Many better things will force a run. But not many put the runner on a clock that builds over time; all of the examples I mentioned stay at the same threat level or decrease in threat with time.

The big problem with Long-Term Investment is that by the time you can actually take credits of it it will have twice as much credits on it as its trash cost. Even if you do immediately empty it upon hitting 8 the previous runner's turn it will have 6 on it, making it an obvious target for the runner.

So you need to protect your investment, or use it to somehow lure the runner into something like a Prisec.

I guess in NBN: Controlling the Message and perhaps even in Gagarin Deep Space: Expanding the Horizon Long-Term Investment can work. Especially in CtM the extra trash cost is interesting. However CtM decks typically pack the even more efficient Commercial Bankers Group so Long-Term Investment doesn't really add much for them. On the other hand with the CtM staple Sensie Actors Union now costing 3 influence some CtM decks may be in need of money that's influence-free.