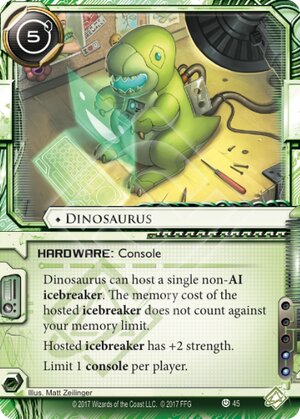 Dinosaurus can host a single non-AI icebreaker. The memory cost of the hosted icebreaker does not count against your memory limit.

Dinosaurus (The Card that got me into the game)

+2 Strength one any Non-AI Icebreaker hosted on it and it discounts the memory cost, Is it Worth it?

Arguably Dinosaurus is...pretty bad. But it still has its uses (At least until Anarchs get a Native ST boost on Yog, but even then Personal touch is a better choice than Dino) and it has certainly shown up in a few sage decks. if I ever rated cards out of 5 this would get a 2, which Incidentally is the Influence cost and the number of times I ran it before I gave up and put it away in the box.

(The Valley era)
Dread Sovereign 295
Might be worth is in a Chameleon deck. — Kroen 15 Apr 2015
Cards it works well with: — mrdudesir 18 Apr 2015
Sage, Yog.0, The Supplier, Kate, cheap, weak breakers. It needs setup, but it has a home in the right deck. — mrdudesir 18 Apr 2015
Endless Hunger is gonna get Dino back in the game. — JonasAlbrecht 11 Aug 2015
Quetzal and Chaos Theory are my favourite runners... yeah Dino is bad, but I can't picture CT without it. A: Cute, B: *really* cute, C: it's not that bad as to not have it's uses. It makes Femme 4 creds cheaper against non-tokened Sentries. I've been experimenting with a Dino'd Femme/sage + Game Day/Beach party/Adjusted Chronotype/Dyson deck ... yeah, it's like trying to build a deck around Dino. But honnestly, what's the point of winning a game between friends (don't play much tourney) if you can't win with style? Dino has a lovable style, and a deck should have an 'identity' as much as anything else. — AdelaH 20 Sep 2015
This is the deal if you are running Sage. It takes it from 2 strength to 6 if there are no other programs or memchips installed. Sage isn't used much though. — quailman2101 17 Feb 2016
4

So. Endless Hunger is not an AI breaker.

The practical side of this interaction is saving four MU and being able to use a standard breaker suite but then "oh also I've got this ETR breaker I can feed my exhausted counter-based breakers and other cards to". Given how overwhelmingly powerful Endless Hunger is, the ability to use it in concert with standard breakers without having to go overboard on +MU effects is actually pretty nice. It can save you a lot of credits in the long run if the corp has enough ETR subroutines sitting around and you have a few exhausted or disposable cards, and a one-of in a Shaper deck already running Dinosaurus can be a nasty surprise if you bring it out at the right time.

It's definitely janky (Hunger is basically not going to be usable unless you have Dinosaurus available to host it on and it makes your console a huge target if the corp has ANY way to destroy it), but the raw power can allow you to do some ridiculous things especially if you deploy it late game and just devour the rest of your board for a series of game-winning accesses that were completely unfeasible before now (That's a nice Curtain Wall you have on your scoring remote there...), and the cost of inclusion isn't too high if you're already using this console for other things and you have tutors to fetch Hunger when it's actually necessary so you only need one of it.

The FUN side is having a 13-strength icebreaker that basically amounts to Dinosaurus becoming possessed by Apex and devouring puny ICE. OM NOM NOM!

(Data and Destiny era)
LordRandomness 227
Much of this also applies to Leprechaun — HollowsHeart 21 Jan 2016
Not the 13 power! (More seriously, Leprechaun is a reasonable alternative and that's why you only really do this if you're already using Dinosaurus or don't want program vulnerability) — LordRandomness 21 Jan 2016
I actually really like this. I think it's actually a better option than Leprechaun provided you have the credits for it. One of Apex's (many) unfortunate downsides is that it has a very difficult time dealing with "Trash a Program" subroutines. Hosting Endless Hunger on Leprechaun is cheaper, but if you facecheck an Ichi 1.0 or Rototurret early game before getting your rig set up, you've just lost your Daemon and breaker. Hardware is still the most difficult part of the Runner's board to trash. Power Shutdown is probably the most common hardware trasher and the Corp is looking at spending 5 creds to trash it. And even then, worst case scenario, you trash Endless Hunger and go grab another. Dinosaurus is the same influence, just a bigger credit and tempo hit, but it frees up a whole rig's worth of memory and has a bit more permanence. I would probably rather go with Dinosaurus and throw in Modded. Cool idea! — WayneMcPain 21 Jan 2016
Corp trashes 5 cards, not spends 5 credits. :) cause that's how Power Shutdown works... — WayneMcPain 21 Jan 2016
0

Dinosaurus is expensive. That will remain true no matter what. The question is, can you justify it to make it you console?

What are the use cases.

First, it negate the MU on the breaker. Engolo, at 2 MU, become zero MU while hosted on Dinosaurus. This is one of the best use. It is the equivalent of having a console granting you 2 MU and giving a free PERMANENT boost (+2) to the breaker. There are 110 ices with strenght of 4 and less. And 51 ices with a strenght of 5 or more. That is 2/3 of the ices in the game than can be broken by Engolo without boosting. If you use Datasucker or Net-Ready Eyes, it can do even more.

You could do the same with Mass-Driver and Battering Ram, sparing the 2 MU they cost and boosting their strenght. Saving MU is nice, it allow you to use those MU for something else. This is why you see Chaos with Dinosaurus. The +1 MU of Chaos, with Dinosaurus, will allow Chaos to install 2 other breaker and still have 3 MU to spare (for 3 Rezeki, usually).

But saving MU is nice. The real thing is the boost. With a +2 boost, this can mean a great many things. First, for some breaker, you might not need to boost them ever again. Amina, Battering Ram and Blackstone will all get to have a permanent strenght of 5! For Mimic, it make it the most efficient sentry breaker in the game. At 5 strenght, Anansi (a very popular sentry) will be broken for 3 creds.

And at 2 influences, it could be used elsewhere. Anarch could use it with their inefficent Black Orchestra or MKUltra. Using it with Musaazi would go a long way into making that breaker more efficient. Yusuf would benefit also. Criminal could use it with Amina.

But the main problem stay : 5 creds is really expensive. That is a significant hit for tempo. In the long run, it will save the runner a lot of creds. If you are unsure of which type of ice you'll face, Rejig will allow you to move a breaker (you will still lose a breaker, but that can be arranged with Simulchip) on Dinosaurus.

This mean Dinosaurus is not for runner that play fast and furious. But by midgame, the creds saved will go a long way toward your victory. Do you play the long game?

Finally, it is among the cutest art in Shaper. It just need a quote.