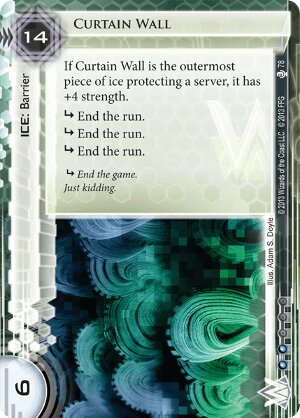 If Curtain Wall is the outermost piece of ice protecting a server, it has +4 strength.

Curtain Wall has some interesting applications along with its absurd cost and a major weakness. Once played, you will sacrifice 4 strength to play anything beyond it, which is a huge blow to its usefulness. It is meant as a capstone to tax the runner out of a server; the final word. However, Hadrian's Wall, for the same cost, has one more power and one less subroutine, without the downside of playing more ice (disregarding clicks to advance it, though). Curtain Wall can only get weaker as the game goes on.

As one of the most expensive pieces of ice in the game, it lacks the sheer crushing power of Janus 1.0, and as discussed, is not as good in the long term as Hadrian. So what would make you want to include this?

Blue Sun. The ability to regain 14 from this ice and be able to reposition it is hugely powerful! Regaining the credits to use on other ice is a massive economic boon. Or, for the cost of one Oversight AI, get 14 next turn!

It is hugely useful in Blue Sun, or if you splash Sunset or Tenma Line for some reason, but be wary otherwise.

(Chrome City era)
Steamwood 303
Hadrian's Wall costs 1 D4v1d counter. Curtain Wall costs 2. That's plenty for me to pick it. — Wookiee 10 Jun 2015
Your maths seems off. Hadrian has two subs, using two D4v1d counters. Curtain Wall has three subs. — Thaddux 10 Jun 2015
He's thinking of Quetzal, clearly :p — cmcadvanced 11 Jun 2015
The feeling when someone at FFG just fired the last sub on this for real ;_; — Sunyavadin 9 Jun 2018
FFG may have ended their run, but I know loads of people are going to keep on playing regardless <3 — ladybunne 10 Jun 2018
Why are we making meme comments on the end of Netrunner from a review of a piece of ice from 3 years ago? I think it's time to just "jack out" of this one. — Scoogsy 4 Sep 2018