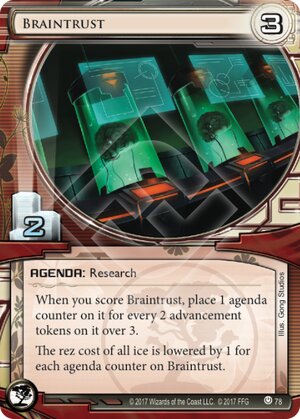 When you score Braintrust, place 1 agenda counter on it for every 2 advancement tokens on it over 3.

The rez cost of all ice is lowered by 1 for each agenda counter on Braintrust.

Possibly the least used agenda in all of Jinteki, Braintrust doesn’t give much bang for its buck. Requiring a double turn scoring window in order to get any bonus out of scoring it, and its effect is not going to be as needed once those ICE protecting it have been rezzed to keep that scoring window open. It is a three for two, which in a Fast Advance strategy is just what the doctor ordered - Some Jinteki have tried that approach, but it has never really caught on.

It could be used for some crazy positional ICE Whirlpool Cell Portal infinite loop combo kill server, but the number of moving parts in there is simply so complicated, it is unlikely to ever be pulled off with any sort of consistency. It is possible that Braintrust would see more use with Fast Advance strategies out of Jinteki, a place where most players have not forged ahead - and that means for at least a little bit, it could be quite a surprise deck to see.

(Chrome City era)
lynkfox 381
There is no possibility that this is the least used Jinteki agenda. The only two agendas seeing considerably more play are The Future Perfect and Nisei Mk II. Any 3/2 agenda is going to see considerable play, and Braintrust is no exception. — Glitch29 1 Jul 2015
Philotic Entanglement is almost always better, although it is limit 1 per deck. — coolkid 30 Oct 2015
The never-advance Jinteki tactic has always loved Braintrust. You can install it naked and, if the runner doesn't run it out of fear of a Snare!, score it for 2 points. If they score it, they're more likely to check your remotes, which means they'll run into that Psychic Field you put down. — PureFlight 6 Apr 2016
2

Let's be very generous to this card an look at it from the point of view of early Netrunner: Jinteki is even poorer than the other corps, and Account Siphon is everywhere. If you're ever going to over-advance this card, it's going to be the first one you draw, early on when there's not much ice rezzed yet, and you can pretend it might be a Junebug or Fetal. Even then, you're risking a big setback if it's stolen after you spent two clicks and two credits on it. Purely for its economic drip/boost, that's arguably not worth it.

What an over-advanced Braintrust does give you, however, is the ability to rez a select few pieces of ice despite having been siphoned down to zero credits; for early Jinteki, the most relevant ones are Chum, Ice Wall, Hunter and Snowflake.

I don't know how extensively early Jinteki players experimented with using Braintrust along those lines, but it's likely over-advancing it simply proved too risky and unreliable for a viable strategy. Regardless, I'm fairly certain that this was the design intent behind it.

There are no blank agendas in Netrunner,** but Braintrust comes pretty darn close.

Even if you could advance Braintrust after scoring it, it would still be a pretty iffy deal. Pay $2 and 2 clicks to reduce rez costs by 1? You'll have to rez four more ICE before you even break even!

What's worse, scoring an over-advanced Braintrust is incompatible with using it effectively: - You want to score it early, but you also need a surplus $2 and 2 clicks - You want to score it before rezzing much ICE, but it has to be protected enough to install-advance-advance - If you're a trappy corp that can bluff it out with Mushin or Kakurenbo, you probably aren't running much ICE

Between this and Project Yadi-Uga (only a bit less useless) it seems clear that NR designers feel that red 2/3 agendas would be OP if they actually did something. Compare these to Beale, Atlas, and Vitruvius. Apparently it's okay for red to have a few 2/3s, but they'd better not also be useful.

** except Vanity Project, but just being a 4/6 is special in itself

Reduced cost is substantially different from a credit rebate, particularly when a cost has been reduced to zero. Your math is correct but your imagination is a little stifled, here.

I mean, there are ways in faction to protect brain trust enough to make it work. Mushin and Caprice Nisei being the first that come to mind. Certainly not the easiest agenda to make effective, but far from useless.