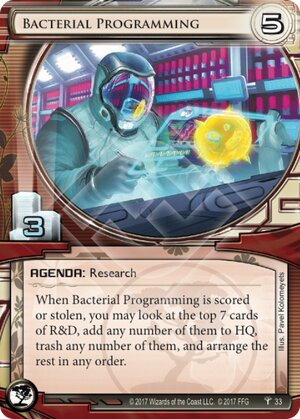 I played with Bacterial Programming for the first time tonight in my Punitive Evolution deck, and for the love of Apex this card is out of control.

The specific play that sold me on it was discarding two copies to Archives (it was a calculated risk) and the Runner stealing both (0-0 -> 0-6), letting me draw 14 cards.

At that point the Runner knew for sure a Punitive was coming up, so they moneyed up, but it wasn't enough.

Mandatory draw up to twenty cards.

Click one, Punitive Counterstrike, no boost. Runner spends half their credits to avoid 6 damage.

Click three, Punitive Counterstrike, no boost. Runner is dismayed at the sight of the third Punitive.

For a more serious discussion of why it's good, it's a 5/3 with a hugely swingy effect that happens regardless of who gets the agenda. Being able to put seven whole cards wherever you want them is a huge boon, and I'm sure with even the slightest bit of creativity, seasoned Jinteki players will be able to get loads of mileage out of this card.

Give this one a whirl sometime, just the once. You'll be glad you did.

(Whispers in Nalubaale era)
archmage 86
Played The Maker's Eye with 4 cards remaining in hand against a PE deck, what could go wrong? Saw 1st card Bacterial Programming, corp proceeds to order the remaining cards and I access a Snare! and another agenda for a total 5 net damage and flatline. Saddest moment ever. — BlackCherries 28 May 2018
Brilliant. Truly the most Jinteki of plays. — archmage 29 May 2018
Why would the effects combine, instead of resolving the first agenda and then resolving the second? — Apex Predator 7 Dec 2019