subroutine Trash the top 3 cards of the stack. Trash Aimor.

"Starving, dehydrated, delirious, I picked a direction and ran, ran for days, maybe even weeks. I ran until my legs couldn't carry me. Then I crawled. When I was finally out, finally free of the shroud, I checked the time, the date. How long had I been gone, trapped in the all-encompassing blackness? Turns out, 3 minutes."
Jinteki • Adam S. Doyle • Down the White Nile 32
All sets:
Links: Decklists | ANCUR 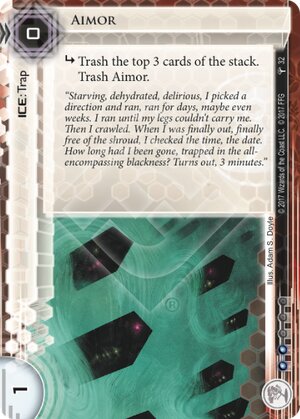 Step 1: Threat Assessment (If they take the 2 tags, this is where you surprise BOOM! them).

Step 2: Slap an Aimor on a central server. Preferably Archives with a couple of Breached Dome in there.

Step 3: An Offer You Can't Refuse.

Silly jank aside, I don't see this card warranting deck slots in any deck besides Jinteki grinders and Skorpios, and even then I'm very hesitant to conclude that. It beats Data Mine and new Mganga in terms of gross cards trashed, which is the number grinder decks care about. However, it is more susceptible to AI breakers (1 and 1 virus counter for Aumakua for example) than the other two and AI are becoming a staple in every runner deck these days. It's unfortunate that a card that received great artwork and even better flavour text will probably not see a lot of play.