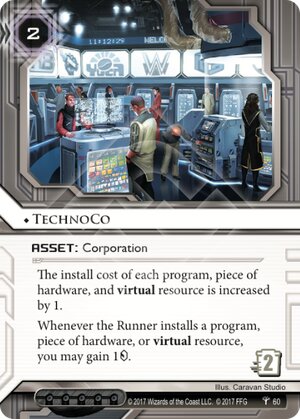 The install cost of each program, piece of hardware, and virtual resource is increased by 1.

Whenever the Runner installs a program, piece of hardware, or virtual resource, you may gain 1credit.

Illustrated by Caravan Studio
Decklists with this card

Looks like a serious earlygame detriment with easy recouping of costs if you're quick enough and can afford the server space. Additionally it combos well with any rig-tampering effects. I like it because it both taxes the runner and provides semi-consistent income.

(Council of the Crest era)
ladybunne 88
I think I agree with this review. I'm currently trying a credit denial New Angeles Sol deck, and this may well fit in to it nicely alongside Scarcity of Resources. — BlueShellGhost 14 Mar 2018
It's like Docklands Crackdown, only really good, instead of really crappy. — quailman2101 19 Mar 2018

This card is amazing with CtM. Because it is a must trash for the runner.

Cool concept, poor numbers. Completely unusable in serious play at this time. The card effect doesn't allow for surprise rezzes at the end of the runner's turn, and a card which can only be rezzed upfront can't be this easy to trash. (Or, if it is this easy to trash, it needs to have a massive effect. See Daily Quest).

Considering that it is a natural cards, I think it has better value. Especially for NBN: Controlling the Message and any factions using HHN. The corp can spend their influence on cards like BOOM! and still have a great econ pressure card that will provoke a run a trash. Pushing the runner to make a risky move while they would rather setup. This fork the runner in being punished for setup and for running. This is why I think the value of this card is good. Especially since you can also put an upgrade on it to hurt the runner even more. Against shapers and anarchs, this card will be potent! Of course, you analysis is good in the fact that there is more potent cards to be played in faction for a lower cost. My argument is that the neutrality of the card make it quite useful for certain archetypes.

CTM has a ton of asset options. Technoco has to beat out whatever slots you're giving to (say) Amani Senai, Commercial Bankers, NASX/PAD Campaign, Rashida, Spin Doctor, Malia, Mumba Temple, Jeeves, Daily Business Casts, and tf34 ran 1x Regolith Mining License. If I had a spare slot for a card not often seen in CTM, I think Salem's Hospitality is a BOLD brew. It's a skill-shot sent from heaven to deliver us from Apocalypse. Super-unreliable but bold.