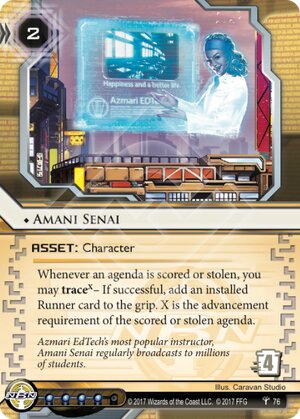 Whenever an agenda is scored or stolen, you may trace [X]– If successful, add an installed Runner card to the grip. X is the advancement requirement of the scored or stolen agenda.

One of the most hated asset from NBN. 4 to trash is no joke. And taking an installed card from the runner's board it a major tempo loss. Even worse if it is an "investment card", like Study Guide, The Turning Wheel, Trope or The Back.

Usually, the returned card will be a breaker. The most expensive one, of course. Returning Engolo in the grip will cost the runner one click and 5 creds. And this can be done if the agenda is scored OR stolen. Try running again after losing your main breaker.

Unless the runner play Sunny. In which case, this is a bad matchup, because it will probably cost the corp more than what it will cost for the runner.

Fortunately for runners, at 4 influences, it will not be seen outside NBN. But in NBN, it should be expected, especially NBN Controlling the Message. Because, even if the runner doesn't trash it, they will lose creds (from the trace) everytime an agenda is scored or stolen.

It is so good, that any NBN should ask themselves why NOT use it.