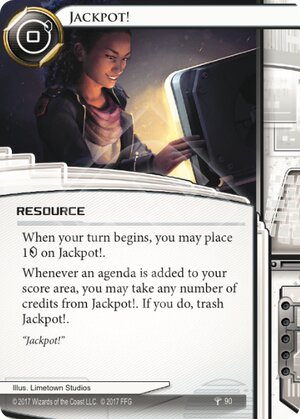 When your turn begins, you may place 1credit on Jackpot!.

Whenever an agenda is added to your score area, you may take any number of credits from Jackpot!. If you do, trash Jackpot!.

"Jackpot!"
Illustrated by Limetown Studios
Decklists with this card

On first glance, it’s really easy to have your eyes glaze over this card and assume nothing more than that it’s a permanent citizen of Janktown. However, Jackpot! has the same value that a card like Dirty Laundry or Successful Demonstration has: it rewards you for doing what you wanted to do anyways as a runner – steal agendas. Given that it can trigger on cards like Notoriety/Fan Site as well, it can be flexible in many Shaper decks.

Through a lot of playtesting, I’ve found Jackpot! does really well keeping up runner tempo. It says – “Go ahead, make that big, expensive DDM run” or “Go ahead, plough through that taxing remote” and most important of all, it says “Don’t be scared of a Punitive Counterstrike threat, here’s some hard-earned dough for your troubles”.

As every card should, Jackpot! definitely has its downsides. I’ve had several games where I would lose 7-0 with a total of almost THIRTY s sitting on multiple Jackpots. Through cyberspace, I can basically hear them laughing at my pathetic and futile attempts to steal an agenda as I stare down credits that I desperately need. In that regard, Jackpot! isn’t like Stimhack where it can provide you the game-winning run – in fact Jackpot! is a dead card if you’re already at game point. Which means it has to be used as an x3 so that you can see it early and get it ticking which is troublesome because that takes up precious slots that could be going to other x1 tech slots – The Shadow Net, Dean Lister, Same Old Thing, etc.

In summary, this card is not worth the full x3 slots unless you live in a Punitive Counterstrike meta (I’m looking at you, limited cardpools) and even then this card should only be played over meat damage prevention when you’re tight on influence. This card might not look like it with its innocent 0 install cost but is quite high risk/reward so it won’t find itself in competitive decks soon. Still, it’s made several of my opponents sweat bullets through virtual space as they see my Jackpot! hit 20+ s. At any point, any single access on centrals feels like a game of Russian Roulette for the corp as they pray that the next card won’t be their last. And when you do hit that sweet, sweet agenda, don’t forget to yell the obligatory “Jackpot!” for the saltiest of tears.