Make a run. After the run is completed, gain 5credit if it was successful.

The data was better than she could have ever imagined. This Santiago fellow really knew what he was doing. She began to imagine the havoc she could wreak at the upcoming charity dinner…
Neutral • Christina Davis • Creation and Control 52
All sets:
Links: Decklists | ANCUR 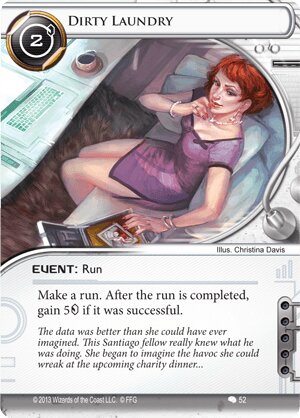 Dirty Laundry is, no doubt about it, a great card. However I believe that it gets mindlessly thrown into a lot of Runner decks and used in ways that are counter-productive. I see people throw away a DL on the first turn by running into Archives despite not having any of the support pieces installed, and I shake my head. Prepaid VoicePAD can help you get a better return on investment for Dirty Laundry but it's still going to be a far worse Sure Gamble when you play it unless you're getting an ancillary benefit for your runs.

This is a card that belongs in a deck which wants successful runs for MORE then card access. Desperado, John Masanori, Grifter, Datasucker, HQ Interface/R&D Interface, these are the cards that should be your combo pieces to make Dirty Laundry an actually worthwhile inclusion in your deck. For those Anarchs out there who like to use ICE destruction and economy denial tools to break open a hole in the corporations' armor, then attack with cards like Medium, Nerve Agent, or Hemorrhage.... Dirty Laundry is for you!

But, if you are habitually using Dirty Laundry to get the net result of an Easy Mark, then you should really rethink whether it belongs in your deck.

(Up and Over era)
umbralAeronaut 774
Would just like to note that this should NOT discourage you from using it for the Easy Mark if you NEED those creds. This review is correct in that if this is ALWAYS how you use Dirty Laundry then you should probably not have it in your deck at all, but part of the usefulness of the card is that it can just turn into three credits if that's what you really need right now. — LordRandomness 6 Jun 2016
3

Compressing both economy and running into one card, Dirty Laundry is one of the Runner's best rools to keep up in tempo with Fast Advance decks, and sustaining your credit pool while keeping up with accesses late game.

Dirty Laundry can be a great card in decks that like to run heavy. Still I think this card is a little overestimated in the online meta. I love the click compression but if all servers are iced, it easily becomes a blank/drawback in your hand and you wish instead for a more solid econ card.

Dirty Laundry is a card I really wanted to like, especially in combination with Comet but it falls down in several respects.

Most of the time, this card sits in your hand waiting until a time when you can both be sure of a successful run and have 2 credits more than you would otherwise need to make that run. For me that has happened once out of about 5 games.

(Business First era)
CascadeHush 58
It combos pretty well when you are going to run anyway. This card compresses clics. For example, imagine that you have Desperado and Grifter out. You need to get in. If you use sure gamble you need 2 clics (one for cash, other for the run). Here you make 2 things in one clic. That's worth a cred. (more less). — valerian32 16 Mar 2016
Also, you can make pressure into the archives and add more tokens to your datasuckers. (if the archives are clean). But, of course is not as universal as Sure gamble or easy mark. = ) — valerian32 16 Mar 2016
If you are only playing a Dirty Laundry once in five games then you are having some problems my friend. First off this card should not be used by itself. This card should be in Criminal decks with desperado, security testing and other cards that benefit from running, or in prepaid kate decks, when that was a thing. Second with the current meta of the corps playing remote heavy, you should have no problem running on an asset they have out to gain credits and trash their cards to make them poor. This card is actually pretty good, i honestly just think you are putting it in decks that it doesn't need to be in, which doesn't make this card bad. — hutch9514 17 Mar 2016
My first review. Thanks for the feedback. Maybe I'll give it another try in a month or two. I'm still experimenting with Creation and Control and a Hayley deck. — CascadeHush 17 Mar 2016
This card never falls down in a Ken deck, who's running Public Terminal now thanks to MWL. With Public Term out, A Ken Dirty Laundry Run becomes 'click for eight credits.' Nine if you have Desperado up. That's a massive swing, especially because you're going to access as well. — GrantZilla1979 18 Mar 2016