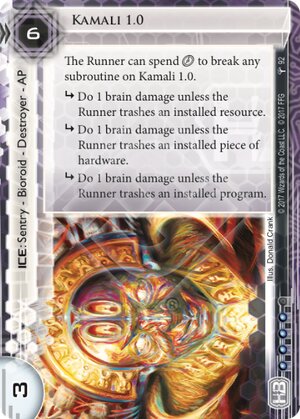 subroutine Do 1 brain damage unless the Runner trashes 1 installed resource.

subroutine Do 1 brain damage unless the Runner trashes 1 installed piece of hardware.

subroutine Do 1 brain damage unless the Runner trashes 1 installed program.

Kamali 1.0 reminds me of a lot of ICE – it has the taxing trash effects of Fairchild 3.0 (and the rest of the suite), the crippling brain damage subs of Janus 1.0 (RIP), and rez/strength numbers similar to Tribunal (which also happens to force the runner to trash cards). Surprisingly, those 3 comparisons range from Restricted to Top-Jank to Unplayable status respectively. If I had to make a guess, Kamali 1.0 is going to be in the middle of those 3 - good, but not great.

With must-break subs similar to Janus 1.0, Kamali 1.0 will either fry your board or fry your brain, already making it better than Tribunal which gave all the flexibility to the Runner to choose which cards to trash as opposed to specific card subtypes. Kamali 1.0 does offer flexibility in being a bioroid but a runner will need to run first click if they want to avoid all brain damage/trashing. The ICE also gives the runner the choice between brain damage and trashing so it will often never lead to a flatline alone as long as the runner has cards to trash.

Finally, its numbers don’t exactly match the Fairchild suite in terms of rez/strength but it can put MKUltra users in a tight spot forcing them to spend either the full 6 or take a brain damage/trash a card after 1 boost. For other killers, you can expect a break cost closer to 3 or 4 (Mimic, Mongoose, Na'Not'K*, GS Shrike M2) which is respectable, but could be better for a 6 investment that doesn't ETR.

Overall, it’s a nice addition to the brain damage theme FFG has pushed for in the Kitara cycle and a lot cheaper than the Jank God that was Janus 1.0 for inflicting brain damage. While it won’t see play in every HB deck as a viable Sentry, it can be synergous in Architects of Tomorrow, with Wetwork Refit, or any deck looking for a good bioroid.

Worth noting that MKUltra can essentially break for 5 -- it installs for 2, so you can break the Hardware and Resource subs, then trash MKUltra itself to the last sub. You don't even need to pay the 2 credits until the next time you encounter a sentry to re-install.