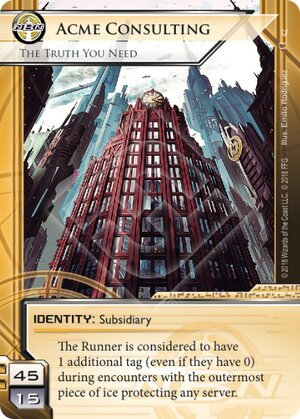 Acme Consulting: The Truth You Need

The Runner is considered to have 1 additional tag (even if they have 0) during encounters with the outermost piece of ice protecting any server.

Writing this from the runner's side... as someone who has had the misfortune of playing against it...

So. I'm going to point out the obvious here... This is a baked in Bandwidth, only without risk of getting broken. This card turns on all those conditional pieces of ICE that NBN love, but are inconsistent... Data Ward and Pachinko being the two that most notably come to mind (UCF has rotated, fortunately). That fact alone made this ID very difficult to deal with. No longer does NBN require these pieces to be positional. Throw a Data Ward in front of your remote, and a Pachinko on your centrals and watch as it will always be cheaper for you to Rez these ICE than it will for me to crack it. Even with Clippy.

And that fact alone, being able to use some of NBNs best pieces of ICE without any further setup, makes me want to grab whatever table I'm playing on and just eat it, cards and all.

"But Drakeheart," your anonymous voice calls out, "It's only the outermost, and one piece of ICE isn't going to keep runners out forever. That's what Bypass is for!"

And this is true. There are a lot of options to fight a deck that only uses a couple pieces of ICE to protect a server. But I wasn't prepared for this ID. And thus, I suffered. Maybe this is me learning how to be a better runner... But this ID made it a sore lesson to learn.

This is one of those ideas that are strong but not terribly consistent. They fold hard to certain match ups and bad draw, more so than other cotps.

Its an interesting balance mechanic to make the ID ability work on the OUTERMOST piece of ice. That being the normally least likely position you would find tag-conditional ice. It also still requires the corp to play ice positionally, albeit in reverse of normal order. But with the main tag-conditional ice being "end the run" barriers, it means that once the runner get past that first layer of ice, you'll need another method of stopping them, which NBN is notoriously short on. It balances an otherwise very strong ID ability well. You'll also have to build your servers up strong before capping them with a tag conditional piece of ice. If you need to add more ice, it may render your Id ability inert on that server. Very interesting design space.