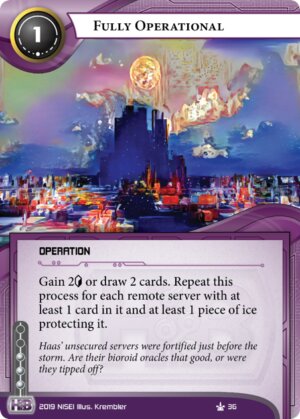 Gain 2credit or draw 2 cards. Repeat this process for each remote server that has a card in its root and is protected by ice.

Haas' unsecured servers were fortified just before the storm. Are their bioroid oracles that good, or were they tipped off?
Illustrated by Krembler
Decklists with this card

I don't want to do anything extensive here, because hey, the card is new and I haven't had the time to analyze all the angles yet. Actually, in a world without NASX, this is a pretty innocent economy card, encouraging the corporation to actually put ICE in front of their assets, instead of spamming out new server after server to gain Turtlebacks money. ...the problem is of course, we live in a world with NASX.

NASX makes this card read, "The corp probably just gained anywhere from 9 to 21 credits for two clicks." With just 2 ICEd remotes with something in them (not that hard to do) this gets you 9 credits for 2 clicks (3 triggers of FO, 6 credits gained, dumped onto NASX doubling the 6 to 12 credits gained, -2 for NASX -1 for FO cost for 9 net). 9 Credits for 2 clicks and 2 cards isn't actually that degenerate--after all, Roughneck Repair Squad gets you 6 for 3 clicks, removes a bad Pub and is re-usable for just 1 card. The problem is when it starts getting out of hand--when your ASAs of the world are doing what they want to do anyway, which is dump things into servers and free-click an ICE in front of it. When these ASAs have upwards of 4 or 5 loaded one-ICE servers, FO/NASX becomes a bit nuts. Heaven forbid they have 2 FO's in hand, because at that point they might as well have infinite money.

That being said, this does require time to set up. If they have 5 remotes with ICE, it's safe to say it's around turn 4 or 5. Likewise, I'm a runner--and if I'm letting things sit in single-ICEd servers, then I'm probably a bit at fault for just letting things sit on the table. Realistically though, there is a limit on just how many times you can trash a Jeeves behind a Fairchild 3.0.

Is it broken? No, not really. There's a lot of counterplay -- trash NASX's when you find them, clean out servers of their contents, or just ignore the shell game entirely and go straight for the centrals in hopes of rushing out. I think my problem is, the FO/NASX combo just feels cheesy. It takes a more or less honest card that was meant to reward a different kind of shell game (actually ICEing all your stuff) and turns it into a "this card only exists to trigger off of NASX." Ah, well; I know those are just my feelings, and I'm sure plenty of people love this thing.