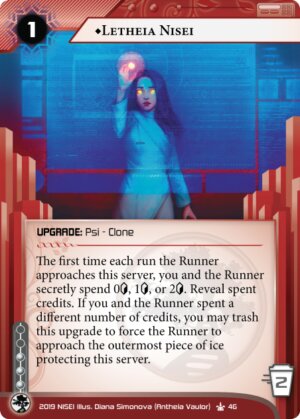 Illustrated by Diana Simonova (Antheia Vaulor)
Decklists with this card

Basically the poor man's Caprice Nisei. And I mean that in a good way, because Caprice could be absolutely absurd.

The main similarity between the two sisters is in the actual psi game. Both upgrades have a (theoretical) 67% chance of denying the runner access to a server. There are two MAJOR differences though. First, Letheia trashes herself if she fires successfully. This means the runner will only have to suffer the consequences once. So no bs turns with Caprice where you run a remote 4 times and get thrown out because you suck at psi games. And secondly, even if Letheia fires, she will cause the runner to approach the server again. This means they can either choose to jack out or just continue through all ice again, if they're rich. Caprice would actually tax the runner clicks, a more important resource than money in many Jinteki glacier games.

Letheia does cost 1 to rez while Caprice costs 2, and their trash costs are 2 and 1 respectively, meaning Letheia is marginally cheaper and less bad in R&D/HQ. Since she trashes herself for her ability though, this isn't a super relevant distinction. Also, gotta love that Nisei Division support.

If you want more ways than ice to protect your servers, you should first consider Marcus Batty and Bio Vault over this, imo. Letheia is definitely not a bad card but especially in Jinteki, the masters of bouncing runners out of servers, I think this isn't strong enough to warrant competitive play.

(Uprising Booster Pack era)
Cpt_nice 1715
This should have worked every run. not just the first. And not self trash on a successful psi game. It would have mr'sade it a soft nerf to Caprice, since it wouldn't tax the runne clicks. Such a shame. Caprice was so important for the game, and the replacement is just bad. Luckily, Chris made Border Control, so glacier is still functional. — TKO 10 Nov 2019
made* it — TKO 10 Nov 2019

Letheia should either have been a "psigame to trash to etr" (basically the same thing palana glaciers do with bio vault, except the advancement token requirement would be swapped for a psigame), or once-per-run run psigame to bounce the runner to the outermost ice on this server (without trashing her).