While the Runner is accessing this card from R&D, they must reveal it.

When the Runner accesses this card, remove 1 bad publicity unless they take 1 tag. 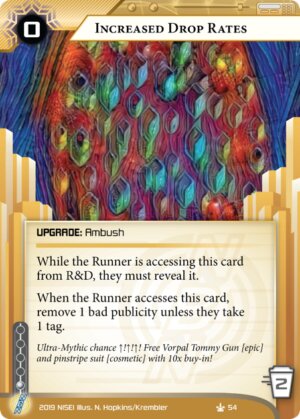 A cute ambush, but too niche to see mainstream play. In NBN, unless you expect most of your tournament match-ups to be Val (and if that is the case, my condolences), this card will probably be dead. You could make a deck with Reality Threedee and/or Game Over, but wouldn't you rather play any of the other great yellow assets and operations?

The Outfit can definitely benefit from this, but many builds straight up ignore the bp in favor of rush and kill strategies. And if the publicity is getting too heated, you could always just hire a Roughneck Repair Squad. That won't cost you any precious influence either.

I won't say this is a bad card, since removing bad pub has always been difficult and handy in some situations. And it is definitely nice that it fires everywhere, including archives. If you fear Val and Mining Accidents, feel free to include a copy. Just don't blame me if you only face Hayleys and 419's.

Ironically, despite the text of this review, Mining Accident has almost become standard in 419 decks nowadays. So perhaps the card's nicheness is starting to find its niche.