Whenever the Runner steals another agenda, you may forfeit this agenda to gain 5credit and add the stolen agenda to HQ.

As the documents show, for eight months they have operated as an entirely independent fiscal entity. We are as appalled at the carelessness as you are, and fully support City Hall's investigation.
Weyland Consortium • Krembler • Downfall 55
All sets:
Links: Decklists | ANCUR 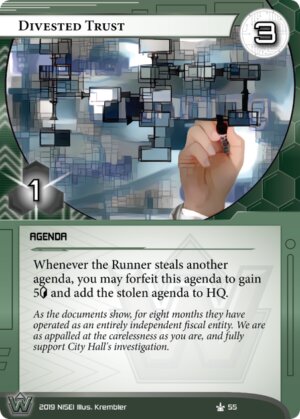 This agenda is amazing and should be played more often. Especially with Weyland decks using faceup agendas.

Once this is scored, it give your big agendas a protection from being stolen. Imagine the runner stealing a City Work Project, paying 2 to 5 cards in meat damage in the process, only to be denied that victory. And to top it off, enabling the corp by giving it 5 creds. Insane!

It is even better if the corp was playing the big agendas, like Government Takeover or Vanity Project. This is the difference between winning and losing the game.

Once it is scored, the corp is much more relaxed, since it can deny the game point victory at anytime, while continuing to push its strategy forward.

A top tier agenda, in my opinion.

There's one major disadvantage with this agenda that means it isn't played much: it doesn't stop the Runner scoring points, it just takes them back. Say you're running Government Takeover. The Runner will get 6 points if they steal it. If you use Divested Trust on it, the Runner still gets 6 points, then loses them again. That means that if the runner steals even 1 point – say, they steal a second copy of Divested Trust – your Divested Trust is now incapable of preventing the Runner winning the game.

You forgot to mention the obvious synergy this agenda has with Punitive. They steal a 3 pointer, you take it back AND get 5 credits to blow them up with.

@callforjudgement, I was under the impression that Divested Trust effect trigger before the runners gains the points, allowing to prevent you from losing the game. This is why I think this agenda is so powerful.

Callforjudgement is right - you've got this agenda incorrect. This agenda cannot prevent a game-winning steal. Once the Runner hits 7 points, a scored Divested Trust cannot be used.

... And it would have been SO easy to just write '[!] Whenever the Runner WOULD steal another agenda, you may forfeit this agenda to gain 5credit and add that agenda to HQ.' and print an actually useful Weyland 3/1 :D