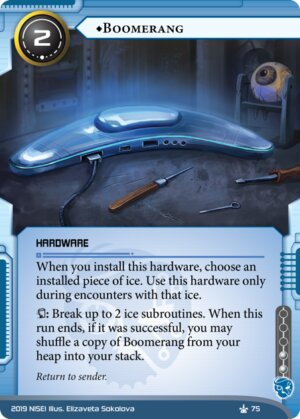 When you install this hardware, choose an installed piece of ice. Use this hardware only during encounters with that ice.

trash: Break up to 2 subroutines. When this run ends, if it is successful, you may shuffle a copy of Boomerang from your heap into your stack.

Return to sender.
Illustrated by Elizaveta Sokolova
Decklists with this card

The single biggest reason why I dislike Boomerang (among many reasons to dislike it) is that it breaks Crim design philosophy. Crims, you see, are Criminals (big shocker there). Their stated goal for why they run is money and their most prominent cards embody this. Paragon (and its more broken predecessor, Desperado) pay you for running. Inside Job and Spear Phishing show how Crims prefer to evade their problems rather than waste money confronting them. Finally, Crims are, well, criminals. They steal stuff. They are especially good at punching Corps in the nose and keeping them down.

Crims however don't confront stuff all that well. They're not really supposed to, you see. Their Fracters are either good but conditional, okay, or laughably bad and outdated (meaning they are in real danger of being locked out) and their Decoders are either great but expensive or just okay. Crims splurge on Killers but only because it's the breaker type that prevents their toys from breaking the most. All this, of course, ignores Aumakua, but even that anomaly is run-dependent and thus somewhat forgiven. Simply put, Crims, more than any other faction, do not wish to overstay their welcome.

Crims lack longevity, basically. That's reinforced by their pick of the color chart as well. They're supposed to be the faction with powerful Events and Resources but little in-faction recursion, and the wisdom of that design decision really shows in Boomerang. Boomerang's self-recursion ability propels it from good to just plain obnoxious. Crims are the Runner faction that emphasize the early game, with a playstyle defined by tempo, control, and resource denial. Crims are supposed to hit fast and hard, getting away with anything, but needing help to reach their goals honestly.

Let's hope that easy, infinite self-recursion isn't something pursued in the future. We already have two cards like that, both of them in Crim. One of them is Boomerang and the other one is banned. Note that the banned card has much more stringent recursion conditions than Boomerang.

Well, there are things that prevent (in different levels of mastering the game) that makes boomerang less hard

I mean, you can (as a runner) choose a bad ice that it's not going to be rezzed. As a corp you have not many, but there are other ways to prevent the run to end successfully. (Border control, crisum grid) Also the multi sub ice is more common nowadays so you can get only 2 subrutines out. Also you can't have more than 1 boomerang on the table.

Aside from the fact that all of the ways you mentioned to make Boomerang 'less hard' are reliant on the runner with minimal room for reaction from the Corp (BC and Crisium Grid have to be installed beforehand), my main issue has always been that Boomerang adds a specific powerful effect to a faction that lacked those particular effects for good reason.

Boomerang is a very interesting Icebreaker-alternative. It's too early for me to have done a full analysis on the new hardware, but it seems like a very useful tool in any deck that wants to run hardware and trash cans (so Az and Geist). It can outright let you walk through some of the most annoying ICE in the game for a mere 2 credits and an install. It doesn't matter if your surveyor has 30 strength--Boomerang breaks it for 2 .

[Edit in light of clarification on hardware uniqueness thanks to Mezuzi]

There is a bit of Corp counterplay though that Boomerang users should be wary of. It's unique, which means you can only have one installed at a time. If you use it to mark an unrezzed piece of ICE that the corp can afford to leave unrezzed (or even over-install the next turn) then your Boomerang just has to sit there, doing nothing until you spend another 2 , a card and a click to overinstall a new one. This now means that in total you've spent 2 (4 if you count each card draw as a click), 2 cards and 4 credits to bypass 1 piece of ICE -- definitely not a good deal, especially if it means some of your hardware/trash can triggers were delayed at the same time. The icing (ICEing?) on the cake is that it also can't recur itself, so the Runner is down 1 Boomerang in their deck. Of course, they probably have recursion somewhere that brings it back, but early on it might be an option to nab a scoring window.

I'm sure new ideas and better analysis will be discovered as time goes on, but for now I would say this is a strong and fun card to have to in the pool.

Both Corps and Runners are allowed to install multiple unique cards in general - it's just that older unique cards get trashed during the next checkpoint. Your friend might be misremembering the "Limit 1 console per player." rule that is written on consoles that would prevent the start of an install of another console.

@Mezuzi -- Thanks for the clarification! I've updated the review to reflect this.