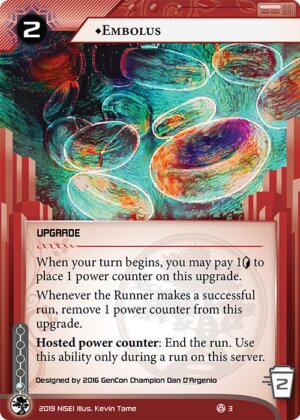 When your turn begins, you may pay 1credit to place 1 power counter on this upgrade.

Whenever the Runner makes a successful run, remove 1 power counter from this upgrade.

Hosted power counter: End the run. Use this ability only during a run on this server.

Embolus is a well balanced card. It is like a Border Control ice, for pretty cheap. It can make the runner miserable. Why do I say it is well balanced. Because it also can be countered with ease, if not used well. Also, it is not cheap (2 to rez), but it effect is powerful.

First, if the corp as unprotected ice, make runs just to take out counter will be easy, making the spending of counter by the corp useless, at the cost of some clicks. Also, for runner that have the abilities to make multiple runs for cheap (Criminal, with their bypass tools, for exemple), it is relatively easy to run other iced centrals (unprotected by Embolus) and run them before make the run on the Embolus protected server. Because of this, Embolus is not used in asset spam decks. Better use Bio Vault for those.

Second, if the corp as multiple Embolus rezzed, it is pretty expensive to put token on all of them.

This is seems bad. But here is the good part.

In Glacier deck, any run is expensive. With 3 counters on Embolus, it is often too expensive to get rid of the counters. Which will push the runner to run the server with Embolus as soon as possible, before they fall in Embolus. It is even worse when there is two Embolus on the board, for the less protected servers and 3 or 4 ices to cross for the others. This is mainly a late game strategy, but it enhance a Glacier quite a bit.

In other archetype, beside asset spam, it can be used with good effect if the corp has a good econ strategy, putting counters on it every turn. But this work mainly if you can put ices early and have Embolus rezzed early, before the runner has finished setting up.

So, this card is strong in Glacier, but weak with other archetype. At one influence, it can be splashed in any faction. It fit well with Jinteki, because of the lack of End the Run ices. With this, it is possible to compensate for that shortcoming.

For comparison Bio Vault require the corp to spend clicks to put counter on it (unless using La Costa Grid or something similar), but allow you have give and ETR anytime, anywhere. And Border Control cost 4 to rez. Both Bio Vault and Border Control are trashed to give an hard End The Run (ETR). Embolus will cost you more (2 to rez, 1 for each counter), but will allow you to manipulate the strategy of the runner. If you have traps waiting for the runner, this can be machiavellian.

Embolus need a more complicated strategy than Border Control and Bio Vault. Those two are usually better for most decks. But Embolus as its place, and its influence cost is much lower, allowing its use in a variety of ID.

I have to admit I thought this card would be gamewarping when I saw it spoiled. Turns out it is indeed more difficult to play than other run-enders.