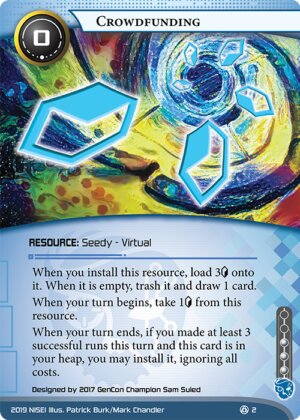 When you install this resource, load 3credit onto it. When it is empty, trash it and draw 1 card.

When your turn begins, take 1credit from this resource.

When your turn ends, if you made at least 3 successful runs this turn and this card is in your heap, you may install it, ignoring all costs.

Who here likes Daily Casts? I do. It's a solid economy card. This is better. Let's compare:

Pretty similar end result (difference being 1 card versus 2 credits the following turn), but Crowdfunding is positive the entire time. And it comes back.

(NAPD Multiplayer era)
EnderA 491
Super solid for criminals who want to go fast, since it is free to install and replaces itself. Too bad it has 3 influence so probably not playable out of faction — Cpt_nice 2 Oct 2018
Too bad you say? I say too good! It's about time Criminals get their good cards costed correctly with regards to influence. — BlackCherries 3 Oct 2018
One side note: the fact that Crowd Funding comes back after 3 successful runs in a single turn combos very well with a post-purge turn spent charging up an Aumakua via multiple runs on Archives or an undefended remote. — Boot 4 Oct 2018
Definitely agreed with BlackCherries. With a lower influence cost, this would just create another Aumakua: powering up the already-stronger factions more than boosting Criminal. Absolutely in love with this card. — w@ke 4 Nov 2018
2

​This card is bonkers! And makes any strategy that keeps servers open hard to play. And for a while now I haven't played against a deck without it.

Let's start with some actions...

It synergieses with everything that wants to run.
It works very well with Liza Talking Thunder: Prominent Legislator as you don't care when they trash your Crowdfundings. And of coure Gabriel Santiago: Consummate Professional. It plays well together with cards like: Paragon, Bankroll, Aumakua, Hot Pursuit, Diversion of Funds, Security Testing, Sneakdoor Beta. When you are a Shaper you can add: Takobi, Kyuban, Beth Kilrain-Chang as with 5 clicks 3 runs is much easier and Cyberdelia although it only pays you once per turn but make 3 runs much easier. As Anarch it works well with Bad Pub (Val), Yusuf, Datasucker and anything else that will load while running that is why you see a lot of them currently and anything that kill ICE like Hippo, Knifed, Spooned, Forked. And of course The Turning Wheel as well as Prey. Works well as a resource in tag me decks, as your opponent usually doesn't trash it.

It allows you to have an endless economy as long as you are able to run 3x within one turn, every like 3 turns. It's biggest enemy is Slot Machine or other cheap rez hard to break ICE like News Hound or Cortex Lock. And as a result Mti when you are not running Employee Strike. Not to forget Targeted Marketing and as a result Sol do you really want to give the corp 10 credits to get 3 & a card?

On the other hand, against a net damage deck like PU which plays 1000 cuts, you don't want to draw that much. In this cases you might don't like it drawing you cards and having your hand clogged with cards.

And of course, we get that sweet Alt Art in our Store Champ 2019 Kits!

Hot take: This card's existence making the game 70/30 runner-favored for five straight months following Magnum Opus is equally if not more responsible for the death of the playerbase than was FFG's decision to cease to print the game.

(System Core 2019 era)
Breaker 3
It's restricted now. Hopefully that means it stays in Blue going forward. — BlackCherries 15 Feb 2019
There have been much worse cards than this (pretty much any of the removed cards in the MWL) and they didn't manage to kill the game. Arguably, given the activity here and on jinteki.net, neither has FFG. — nandemo 24 Apr 2019