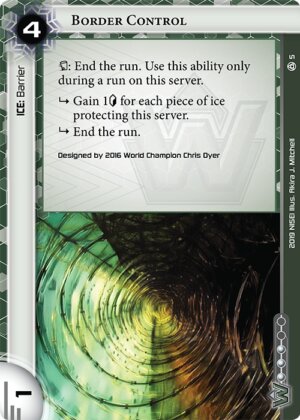 trash: End the run. Use this ability only during a run on this server.

subroutine Gain 1credit for each piece of ice protecting this server.

The fact, that this card is not on the MWL (currently NISEI 3.3) says a lot more about the meta than i would like. It's not enough to print good ice for the corp, because the runner economy is off the charts.

The effect is obviously incredibly strong and a lot easier to set up than Nisei MK2 or Bio vault. You can also just wait till the runner breaks all the other ICE in this server and then trigger the effect. Most decks that want to win by scoring at least consider including this piece of ICE. And thats fine, sure. There are lots of powerful cards that see extensive play in other archetypes (Looking at you HHN!).

My problem is, that the resulting gameplay can be quite frustrating for the runner. Not many reviews include a perspective on the fun that cards lend to the game or in this case (in my opinion at least) take away from the game. And I'm willing to conceit, that there are very similar cards that have similar effects, the ones mentioned above, ash and batty, etc., but for some reasons these don't annoy me as much. I think it comes down to psychological reasons. I ALREADY BROKE THE ICE! YOU CAN'T MAKE ME GO BACK!

Bottom line: Put this bad boy on the restricted list already and leave it out of your kitchen table meta. Thank you for coming to my talk.

(Magnum Opus Reprint era)
Aterriblesound 58
It's always going to feel unfair when the corp plays cards that stop the runner from getting in, but they are required for scoring points to be a possible thing. Killing runner economy more doesn't solve the problem. All that would do is turn every game into a coin flip of guess the card in the remote. If it's an agenda, cool you win the game. If not, you don't have enough money to run again, so i guess the corp wins. It just an unfortunate aspect of how the game was designed that hard ETRs are required for it to function. — TKO 10 Nov 2019
3

This card is insane out of Mti (and with thimblerig), an end the run ice that can double as a nesei counter is strong anyway but with the positional power of Mti (and thimblerig) you can just make servers that look quite weak require 3-4 or even 5 clicks to get through.

The fact it ends the run also means it needs to be broken to even threaten it's trash ability usually. - There are a few niché cases where you trash it as soon as you rez it, to stop stimhack money being spent for example.

Outside of Mti or thimble, the card is still strong, but you need to think more carefully where to put it.

Easily the best of the Mopus cards.

(NAPD Multiplayer era)
NtscapeNavigator 918
MTI was already considerably OP and this will just make it worse. The ID probably needs to go the route of Skorp and PU. — Cpt_nice 20 Sep 2018
I don't think MTI is "op" as such just very punishing. — NtscapeNavigator 20 Sep 2018
But I agree it should be restricted over restricting Border control (which is what others have suggested), all restricting border does it let MTI wait for the next good ice to arrive to abuse. — NtscapeNavigator 20 Sep 2018
Can Ankusa bounce it before the corp can use Border Control to end the run? — Vortilion 5 Feb 2019
Not exactly. The corp has a window to use it during the approach if they so choose — BlackCherries 5 Feb 2019
3

Border Control is in the top 5 for best ice in the game. The ability to give an End The Run (ETR) at any giving point while the runner is running in its server, is a top tier ability. On top of that, it has a subs for ETR, meaning it is still good early against facecheck.

Alas, its low strenght mean it get broken for cheap by pretty much every breakers, costing 2 creds to breaks (still more than 1 cred).

But for this, it needs help. Border Control is best used in Glacier, forcing runners to run the full suite of ice in a server twice, to be able to get to the bottom. Thus wasting precious creds and at least one click. This is where is get such bad rep for runner, because it make the cost of running much more painful.

Another way Border Control can be helped is by using Mason Bellamy. Mason will take the clicks from the runner, once you pop the ETR of Border Control, the runner will not be able to come back on the same turn. Allowing the corp to score its agenda.

There are some drawback. First is the cost. 4 credits for a weak ice is a lot. And once you pop the Border Control, you lose it. Also, Border Control will protect only one server. And finally, using Border Control in Glacier, which is the usual strategy, will make installing ices more costly, since you'll have to reinstall an ice after losing it.

The two obvious competitor of Border Control are Embolus and Bio Vault. Embolus is more tricky to use well. It could cost the corp about the same amount of creds, but can be also completely useless. Bio Vault is a much stronger contender. For 2 clicks more (clicks are more precious than creds usually), Bio Vault will have the same ability as a Nisei MK II, much stronger than Border Control. But Bio Vault will not appear as an ice. This make the runner less wary of facechecking. Also, Bio Vault and Embolus can be more easily trashed.

If the corp use Border Control, it will need to base their strategy around it. It is that powerful. But at 3 influences, it might be worth to use it outside Weyland, but it become the main focus of the defensive strategy. Finally, knowing when to use Border Control is an art. There are easy rule, like triggering Border Control to protect an agenda. But it is a silver bullet, and thus cannot be used willy nilly, like any top tier ices.