Hosted agenda counter: Install 1 piece of ice from HQ or Archives in any position protecting a server, ignoring all costs. 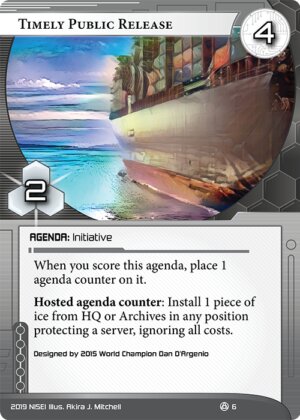 4-2 agendas have historically needed to be "the shit" to be considered playable. Unfortunately, I don't think this card is quite there in terms of power.

That is not to say this card is bad. First and foremost, it is incredibly versatile. Placing ice in any position on any server is not an effect I think we have seen before. It allows for some really cool tricks with positional ice and installs from both archives or your hand. At worst it saves you some credits from installing at the outermost position of a big server, which is still valueable.

It being a one time thing is what keeps it down imo. I think if it received 2 counters on a score, it would definitely be playable in glacier. You probably don't play something like Bifrost Array just to get 1 more counter on this. Maybe if you combine it with other 'when scored' agendas? But now we might be going into jank territory.

(NAPD Multiplayer era)
Cpt_nice 935
It's important to note that this is a paid ability that can be used at any time, even during a run. So if the runner approaches the outermost ICE of a server you can install a piece of ICE form archives directly behind it to strengthen the server on demand and mess with the runners expected run cost. — Krams 4 Oct 2018
In Titan with Border Control, it's a Nisei MK2 with 2 counters, with Project Atlas in faction. — LeePo 10 Oct 2018
I think, but I'm not 100% sure, that you cannot use this ability on a server with 0 ice to force the runner to encounter a new piece of ice when running it. Might be important to note. Basically because when the runner initiates a run, if there is no ice protecting the server they go straight to step for of the run which is after all ice. — miaxari 24 Nov 2018