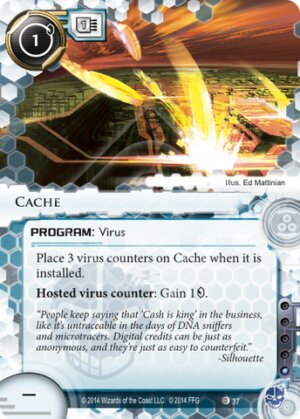 Place 3 virus counters on Cache when it is installed.

"People keep saying that 'Cash is king' in the business, like it's untraceable in the days of DNA sniffers and microtracers. Digital credits can be just as anonymous, and they're just as easy to counterfeit." -Silhouette
Illustrated by Ed Mattinian
Decklists with this card

Great little card though at time of writing only really fits in 2 arguably 3 runners deck.

First and most popularly Noise: Hacker Extraordinaire. Install, Mill Take all the counters off maybe pawn it later.

Secondly Nasir Meidan: Cyber Explorer unlike Noise Nasir will leave the counters on a Cache allowing him to gain the money as he needs it during a run great for after an Ice res like Pop-up Window.

Arguably Exile: Streethawk I've seen it in some exile decks as a draw and burst econ for a Clone Chip i personally don't think it's a good use but it see's play.

*I also feel this card could see more play when Salvager comes out.

Can net Huge amount of money when set up

Is a Virus (works with Grimoire, Cyberfeeder and the like)

Credits are not in your credit pool until you take the counters off.

Takes some set up/time for huge econ boost (Aesop's Pawnshop, Cyberfeeder's and the like)

Is a Virus (can be purged)

Aesop's Pawnshop: For a , card and this combo brings in a massive total of 6 spread over two turns.

Grimoire: With Grimoire the runner will gain an additional .

Aesop's Pawnshop + Grimoire: This three card combo will net the runner a total of 6 for just one ! Put that in a Noise deck and you've just put yourself in a position to cause some serious Anarch chaos.

Clone Chip: If the runner doesn't need Clone Chip to grab another program Clone Chip can become a great economy card used to recur Cache. When combined with Grimoire and Aesop's Pawnshop a single Clone Chip can net the runner an additional 5 by the beginning of the next turn.

Scheherazade: You can install Cache on Scheherazade with no fear because more often than not Cache will be pawned at the beginning of your next turn.

Cache can fit anywhere in the runner's turn. The runner can use it first to catch the Corp off guard with the unexpected credit pool or the runner can save Cache for later in the turn barring damage and other needs to draw.

The runner should be wary of two scenarios:

(Breaker Bay era)
EXE 4
This is my first card review. I welcome any feedback as I would like to become a productive member of the NetrunnerDB community. — EXE 3 May 2015
Welcome! Your Combo line about Noise is wrong - Noise does not give it another virus counter. The value is Cache is a virus so Noise gets to mill another card. — Ber 3 May 2015
More synergies: Kate, Cyberfeeder and Sahasahara, which provide recurring credits to remove the install cost. Scheherazade, which adds +1 to the value of each Cache. Clone Chip, for pulling out Caches on the corps turn, then selling them straight to Aesops for a clickless, surprise +5-8 credit burst. — Circadia 4 May 2015
@Ber You're right! Argh. Thanks for catching that. Editing the review now. — EXE 5 May 2015
Trying to edit the review, but it doesn't seem to save the changes. I am trying to make the correction regarding Noise and incorporate @Circadia's suggestions. Any ideas? — EXE 5 May 2015
There we go. Finally got it to take. Sometimes you just have to whine about something not working to get it to work. — EXE 5 May 2015
Don't forget Sheherazade. Adds that much more value to Cache and is cheaper than Grimoire, especially if Cache is your only virus — Caspian89 5 May 2015
@Caspian89 Thanks for the heads up. Grimoire works better if you're running a ton of viruses (i.e. Noise), but you're right that Sheherazade is better if cache is your only virus. — EXE 5 May 2015
0

Good card, good quote, but the art could be revised for something more evocative.

Like the other review said, this will combo well with Aesop's Pawnshop. At 1 influence, you can splash it in any faction. Freedom Khumalo: Crypto-Anarchist will benefit from having a versatile card, that can give 3 viruses for 1 creds and give some creds otherwise. This make Cyberfeeder worth it, making the card act like a Easy Mark.

Shaper using Maven will love to have a card that can be install for cheap that give creds on top of it.

Not the most powerful card, but it has a place in multiple archetypes.