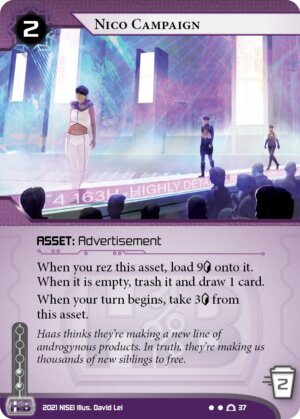 When you rez this asset, load 9credit onto it. When it is empty, trash it and draw 1 card.

When your turn begins, take 3credit from this asset.

Haas thinks they're making a new line of androgynous products. In truth, they're making us thousands of new siblings to free.
Illustrated by David Lei
Decklists with this card

An incredibly strong economic tool only held back by its low trash cost, which makes it less appealing to place undefended than its counterpart Marilyn Campaign. But it goes +7 and a card draw over 3 turns, compared to the longer cook time of Marilyn Campaign (+6 over 4 turns) and Adonis Campaign (+8 over 4 turns, with a higher up-front cost). In addition to paying out faster, Nico is credit positive the turn it is rezzed, costing the corp nothing in tempo aside from the click spent to install. A frankly amazing asset to place in a scoring remote for a turn or two. Even if you cut it off a turn early and don't get the last 3 credits and card, it still goes +4 -- that's a Hedge Fund!

The cost-benefit numbers on this card are strong compared to older assets. Nico only takes $2 to get started and it's credit-positive when rezzed. Nico nets 7 credits and 1 card drawn over 3 turns rezzed. That's solid medium-term value for a click. A PAD Campaign needs 9 turns rezzed to net that many credits and 3 turns rezzed to even turn a profit. Regolith Mining License nets $13 over 6 clicks.

If you're in a setup where you can guard multiple assets simultaneously, Nico is a strong contender. If you are in a setup where you can only guard one asset/agenda at a time, parking Nico in your scoring server for 3 turns may delay your scoring windows. Regolith Mining License will often be easier to use for these decks because it spends fewer turns blocking a scoring server and is more flexible. (If the corp is tight on time and needs to trash a Regolith which still has $3 left, even a partial Regolith produces a good economic return. A Nico trashed with $3 remaining is a slower, riskier Hedge Fund, not very appealing).

Very good economic asset. It will be credit positive as soon as you start using it, unlike its counterpart (Marilyn Campaign). Best of all, it even refund you for drawing it, by drawing a card for you. Again, a super efficient way to gain creds.

Granted, it is easy to trash, with a mere 2 to trash it. And at 2 influences, it is among the best econ asset, with Marilyn Campaign. Unlike Marilyn Campaign, it does not go back in R&D it trashed or empty. But it gives you more credits and it gives those credits faster.

I don't understand the flavour text for 2 reasons: 1. it seems that it's not HB culture talking here. Is it a runner saying that? 2. What does it mean that they are making us siblings to free?

You know, it could be a relatively liberated bioroid (you know, Adam) saying that he could remove the directives controlling other bioroids, or someone like the investigator from Android (forgot his name, but he appears in the original core set on an <span class="icon icon-haas-bioroid"></span> card).

"They are making us siblings to free." The speaker (probably a runner) is convolutedly referencing that the droids don't have a single gender. It reads like "We need to break our gender-nonspecific friends out of prison!" It's a super awkward way to force a demographic cue into a sentence where it isn't actually relevant.