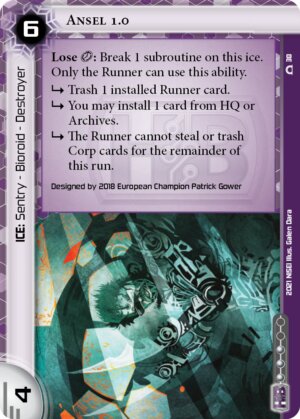 subroutine You may install 1 card from HQ or Archives.

subroutine The Runner cannot steal or trash Corp cards for the remainder of this run.

Ansel 1.0 is an attractive, if expensive, sentry with fairly high strength and a nasty facecheck.

For this review we will focus on the startup format, which is my preferred format right now.

As a result, this ice falls into sort of an odd niche:

My take is this:

Most runners won't facecheck ice unless, they have a killer out, or they can Boomerang it or put a Botulus on it with two counters, or they have no cards on the board to trash yet. Against HB, they also usually won't run last click.

Because of this, the first subroutine will almost never fire, and then it is a toss-up whether the second or third will fire, if either.

Therefore, I tend to view this card sort of like a very big Drafter.

If you are running a deck with

then Ansel 1.0 may do a lot of work. E.g. a runner doing a Khusyuk run really must break not only the third sub but also the second sub, or you will re-install Crisium Grid just in time before they reach R&D.

If your deck already has 3 Drafter it might make sense to run an Ansel 1.0 or two, particularly because stacking Ansel 1.0 and Drafter makes Bukhgalter less efficient.

If the second sub isn't likely to do very much in your deck, you might want to consider a different ice IMO.

Afterimage can also bypass it with 2 credits, maybe important!

Very good sentry. While all the effect are good, it is easy for the runner to avoid those effect by clicking through it, just like most bioroid ices. As with all bioroid ices, the ratio of strenght to cost is very good.

When clicking through Ansel 1.0, most runners will want to stop the first subroutine, and then the last subroutine, in the early game. In the late game, this ice is porous, as it allow the runner to pass through it for the price of 1 (the last subs). So, keep that in mind if you want to rely on it for protection.

The lore behind the name is super fun. You can watch @amavric explain it on his channel (at 40.11 minutes) : www.youtube.com .

The art is a bit abstract for my taste, mainly because it is hard to make sense of the layers of details on it. For such a great ice, I would have liked a quote to add to the flavor. Very well designed bioroid sentry.

Can you install a card after Ansel's subroutine and rez it during the same run?

The Ansel 1.0 install is just like a normal click to install, so you'd be installing the new ice at the outermost end, so the runner wouldn't encounter it since they're already passed it.