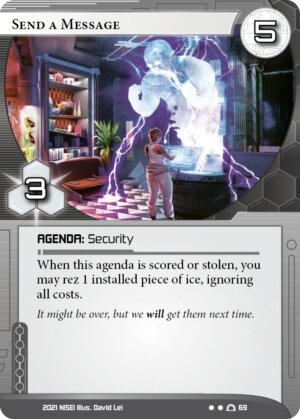 When this agenda is scored or stolen, you may rez 1 installed piece of ice, ignoring all costs.

It might be over, but we <strong>will</strong> get them next time.
Illustrated by David Lei
Decklists with this card

I can write a long write-up expounding about how analogous this is as an econ option compared to SSL or how this is just a better PriReq and the merits thereof, but instead I'm just gonna tell you to play this with the mafia Corp for the lore. Yes, it's actually incredibly potent being able to rez 10 and 7 cost ice for cheaper than free (That oughtta show em. Ah, there's my money. Hah? SSL banned? Fuggedaboutit!). Yes, even if you lose the element of surprise in the process (Whatcha lookin at, punk?).

Yes, overall it's pretty good and can fill in that space that SSL left in certain decks, but who cares about the little stuff? I added it in for the flavor. It being good was just a side effect.