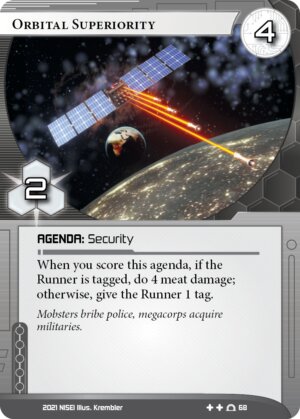 When you score this agenda, if the Runner is tagged, do 4 meat damage; otherwise, give the Runner 1 tag.

Part of a kill package to get the runner. The mere existence of this agenda mean that a runner that goes "tag me" (meaning a total disregard to collecting tags), the corp could probably flatline the runner just by scoring this agenda.

Otherwise, it can at least give a tag. Which is why this agenda will mainly see play in NBN: Reality Plus deck. Since the tag will give 2 back to the runner, thus making it cheaper to score this agenda.

Alternatively, you can put 3 advancements on Orbital Superiority, then wait for the next turn to use Public Trail, tag the runner and score the agenda, thus causing 4 meat damages.

If you are running a kill deck, using BOOM! or High-Profile Target, Orbital Superiority will synergize with your strategy very well.

By its neutral nature, it could be used in any faction, but I expect to see it mainly in Weyland and NBN.

The quote and the art synergize together to let you intuitively understand what the card is about. Nice.