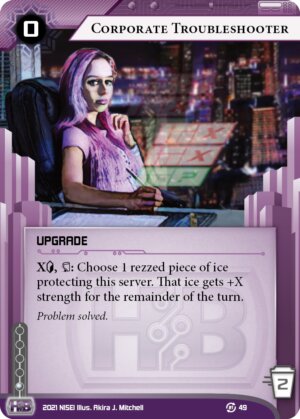 Xcredit, trash: Choose 1 rezzed piece of ice protecting this server. That ice gets +X strength for the remainder of the turn.

Problem solved.
Illustrated by NtscapeNavigator
Decklists with this card

This is a card that could possibly be making a large comeback. Originally, the cost did not seem worth the effect. Corporations didn’t have a lot of free cash to be throwing at strength of an ICE, and only working once didn’t seem very much worth the card slot either.

Yet recursion is quickly becoming more and more prevalent for the corp. Add to that the one true power creep of Netrunner that is economy, and Corporations having tons of credits to sink into this kind of card become possible. With the final piece that ICE that hurts more or is more dangerous to the runner if they can’t break it, Corporate Troubleshooter could quickly see a resurgence in possibilities.

Because this card is used during the paid ability window after the runner has already decided to encounter the ICE, with enough money there is no way for the runner to avoid the subroutines firing. Given that most of the time ICE subroutines are only effective on the corps terms the turn you rez the card, this can make the primary tool of interaction the corp has with the runner (ICE) hit more than once or twice.

At only one influence, it certainly is going to see far more play as a card to make ICE effective mid to late game, and should see more of an impact.

(Breaker Bay era)
lynkfox 381
Best with ice that kills the runner, does major damage to their rig, and/or ends the run. So Archer has long been a favourite, and now NEXT Gold is another good target. — Ber 27 Apr 2015
In my humble opinion (which I wish to share with everyone ;) ) it is best for any ICE you want the subroutine to fire again. Program trashing is particularly powerful. Using it on an Architect would be awesome if Mimic has hit the table. Using it for any non bioroid subroutine (or a bioroid if they are out of clicks) subroutine can be very useful - The fact is that subroutines on ICE rarely fire more than the first time encountered, and only then before a rig is mostly built. Corporate troubleshooter turns back on any subroutines at all - damaging, trashing, unique, or even an ETR if you are desperate to score, and can't find a window. — lynkfox 27 Apr 2015
The best counter, in my opinion, is D4v1d, but it's 4 anarch influence. — EnderA 17 Jun 2015
How does this interact with Sifr? — clydeiii 19 Jan 2017
@clydeiii all of the active player's abilities fire first, so Sifr would lower ICE strength to 0 and Parasite would then trash it before you got a chance to use the Troubleshooter. — yads 25 Jan 2017
2

You can install this on runner card Off-Campus Apartment. So cool!

That aside, Corporate Troubleshooter isn't too useful since D4v1d is a thing. Sure is great when you can invalidate one-time strength boosts with one-time icebreaking!

(Salsette Island era)
WildM 289
I think Apartment doesn't work for a number of reasons but it's an amusing thought. I suppose you could also trash it with Snatch and Grab or Contract Killer if you wanted to as well. — Zakalwe 19 May 2016
Interestingly enough, Corporate Troubleshooter cannot be shot down with S&W .45. He's the one who shoots. — H0tl1ne 19 May 2016
2

MCA Informant can (at the time of writing) be installed on Corporate Troubleshooter. This is very, very bad. The runner has a permanent tag until they run and trash the combo... So, as usual, a HB card means NBN wins again.

(Station One era)
oldman 17
I KNEW IT that this Connection subtype is there for a REASON! — H0tl1ne 26 Mar 2017
Wow, it's even somewhat official: <http://ancur.wikia.com/wiki/Station_One_UFAQ#MCA_Informant>. That's a rather painful miss during card design. — Silv 26 Mar 2017
I don't think it is an omission. Since it is terminal, the Corp still has to wait one whole turn before he blasts the Runner to bits. The combo itself is fascinating, though I have my doubts if it is balanced and makes sense thematically. — H0tl1ne 27 Mar 2017
Oh jeez everyone is overreacting like crazy. Runner has an entire turn to deal with this, and it's not like a single tag is the end of the world all the time. — kevo31415 19 Apr 2017
1

"Problem solved" is a clever flavor text for a card which needed a reprinting to remove the Connection subtype. (Every other Connection is a runner card, and Corporate Troubleshooter's connection status led to bizarre situations where a Corp card became a freakishly hard-to-trash MCA Informant).

The problem they haven't solved yet is that this card is so hard to use outside of MCA Informant. Spending $X and an install to give X strength once is usually a losing proposition for the corp. For this to be anything more than an expensive end-the-run, you need to be able to afford a nasty ice AND a card slot for Troubleshooter which usually won't contribute much AND have enough money to shoot the troublemaker.

Replacing this card with a cheap ice is almost always more long-term value.

Props to artist for an eccentric corporate character design which looks good and fits the setting.

Didn´t even know that when you reprint a card, you can change the text/subtypes... Does that mean that NISEI can do whatever they want with old cards´ texts? Anyways, if I get the old copy, I might be able to pull the MCA informant combo, given that " you can use older versions of cards if they´re legal now"

I think they’ve since clarified that the newest version of a card is canonical.