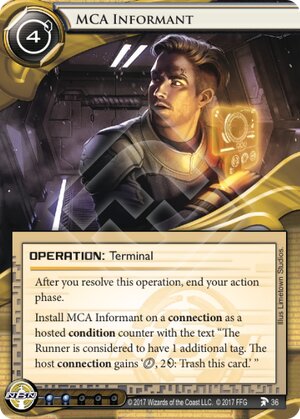 After you resolve this operation, your action phase ends.

Host this operation on an installed connection resource as a condition counter with "The Runner is considered to have 1 additional tag. Host resource gains 'click, 2credit: Trash this resource.'"

Illustrated by Limetown Studios
Decklists with this card

So the website here does not reflect this yet, but this card did receive an errata. It can only be used on a "connection resource". So no more cheap troubleshooter plays. That said, lets move on.

This card seems like a necessary evil to me. Using this card will almost always force the runner to trash that connection. And to use 2 and a to do it. Because let's face it, if they were going to play "tag me", they probably wouldn't have installed a connection (there may be some exceptions, like the upcoming Jarogniew Mercs). This is quite powerful, as you can get rid of some of the most troublesome cards runners have access to. And the reason it is so necessary is because there are certain connections that completely undermine a specific strategy you may be employing. Seeing Film Critic hit the table when you are playing as Haarpsichord Studios: Entertainment Unleashed elicits a sinking feeling. Ditto if you are playing a Midseason Replacements deck (if you are playing this kind of deck though, I advise you to stop, it is a stupid card). Aaron Marrón is going to give any tag-heavy deck a hard time, whether you are relying on said tags to flat-line or just tax the runner. So MCA Informant can save the day, and without the chancy psi game. Hence the 4 play-cost seems fair.

The evil comes in the form of its interaction with another card, namely, Zealous Judge. After playing MCA Informant, you can rez Zealous Judge as soon as the runners turn starts. They then basically have to do the following right away: Get rid of the Informant, access the Judge, and trash him. I made a deck specifically to see if this was as easy to win with as I envisioned. And I went 7 for 7. I made it in Skorpios Defense Systems: Persuasive Power just for the smaller deck size. Almost all runners drop a connection right away. Hide the Judge behind a Data Raven and/or a Chimera and they are going to have a real tough time so early in the game. After they try and fail, just hit 'em with a nuke. Anyway, seems a bit too powerful to me, so I will not be doing it again.

(Earth's Scion era)
quailman2101 277
"So the website here does not reflect this yet..." yes it does, — lunchmoney 6 Jun 2017
I guess it does mention an errata exists for the card. I didn't notice that. However, it still says (much more visibly) under the Rulings, that you can install this on a Corporate Troubleshooter. — quailman2101 6 Jun 2017
4

So I guess everybody knows about the MCA Troubleshooter by now. I'm not going to talk about that one as I think he'll take a dive once the agent from the Errata Corporation in Minnesota gets his ass to Mars.

I have to say, I kinda like MCA Informant. It's not a strong card but it's nice from a game design perspective. The idea behind MCA Informant is to make one of the runner's connections a snitch and make the runner pay up or risk corp retaliation through a tag. This forces a choice on the runner and forcing choices on your opponent should increase the interactivity and tension of the game, both good things.

Because MCA Informant only works on connections there's a limited list of options. Looking through that list we have some familiar names like Professional Contacts, Street Peddler, Film Critic, Tech Trader, Political Operative, Technical Writer, Beth Kilrain-Chang and Aaron Marrón.

However not all of these are suited to put MCA Informant on. Cards that trash themselves kinda defeat the purpose of forcing a choice, the runner will simply trash them. That means Street Peddler and Technical Writer aren't good choices.

Another way to get rid of MCA Informant is by simply installing a second version of a unique card. Most connections are unique. This is a good way to replace that snitch Aaron Marrón with it's own twin brother (I guess he learned that trick from Rene at the cafe).

Assuming you've got MCA Informant installed, is it any good? Well... kinda. Most of the time the runner will simply trash the connection, most aren't that critical and being tagged is generally worse. So it's probably click 1: pay 2 and dump the snitch. It's a bit of a tax but it's not very reliable since you don't know if the runner will have use connections.

Because MCA Informant is a terminal you can't immediately follow up with the usual tag nastyness (The All-Seeing I, BOOM!, Closed Accounts). There are a few small tricks you can still use though.

Most useful is probably rezzing a Zealous Judge. If it's well protected enough that gives you the option of tagging the runner at the start of your next turn so you can unless corp payback.

A more creative option is scoring a sufficiently advanced Market Research. It's not terribly easy to do but if you can get the combo off that's a 4/3 you scored and one that's only a 4/2 to the runner.

In Harishchandra Ent.: Where You're the Star even having the runner tagged for a little while gives you valuable information.

That's about all I can think of though. I'm sure someone will pop up in the comments to point out the obvious thing I missed because my palm hasn't has sufficiently close contact with my forehead today yet.

MCA Informant is an interesting card and I hope FFG will explore this part of the design space further, but as is (without the Corporate Troubleshooter accidental combo) it's not really a strong card. I wouldn't want to call it very weak either however, it's applicable in enough cases that there's a fair chance you'll get some value out of it.

(Station One era)
Silv 347
Sell that snitch to Aesop ! Huh, what ?! Aesop, after all these years, you... No, not you ! — Lupus Yonderboi 27 Mar 2017
That Market Research combo you're suggesting is extreeeemely unlikely to pull off. MCA is terminal and closes your last scoring window for the turn. So, in order to use it with Market Research it has to survive a whole runner turn. And in that case you could use MCA for _any_ kind of tag punishment. — Krams 28 Mar 2017
You'r right, I misunderstood the effect of terminal. Since it ends the action phase the window for scoring that's normally present after every action disappears. — Silv 28 Mar 2017
It may not be the strongest card but putting an informant on Aaron or Kati or Beth is just really awesome from a flavor perspective. — Captain 30 Mar 2017
Rachel Beckman decides to get the hell out because she's on to her. Wait, what? — H0tl1ne 30 Mar 2017
Just to re-iterate a bit: because MCA Informant is only 2 influence it can be a good option for Jinteki decks which rely on damage-on-steal cards like Obokata Protocol and Ben Musashi. Just make sure you also pack The All-Seeing I (1 influence). — Silv 8 Jul 2017
1

So, everyone has seen the MCA-Corporate Troubleshooter combo that hasn't had an errata yet......so CTM just gets significantly better. Obviously MCA is also great for A-a-Ron and other game changing resources. Let's take advantage of this card while it's so powerfulate! Not sure what else to say. Good day.